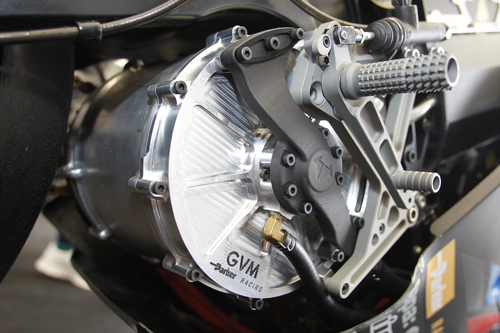 The prototype bikes, ridden by William Dunlop and 'General' Lee Johnston, pack a powerful punch. Each features a dedicated electric racing motor and power cells, plus highly sophisticated electric controls to maximise peak power, power delivery, and durability under racing conditions. The bikes weigh just 220 kg, which is remarkably low for the performance they can achieve.

On the first day of practice at its Zero debut, Victory became the third team ever to achieve an average speed of +100 mph or more – posting their laps in 21.31.322 (Johnston) and 21.43.717 minutes (Dunlop) with battery power to spare. The average lap speeds achieved were 105.185 mph for Johnston and 104.185 for Dunlop, and both riders achieved 140 mph through the Sulby speed trap.

When developing the motor, Parker’s designers needed to tackle two big challenges. First, they needed to get maximum horsepower out of a compact motor with a fixed space envelope. Second, they needed to make the motor efficient enough to help the battery pack last the entire 37.73 miles, with average lap speeds approaching 120 miles an hour (and where riders have to go up a mountain to reach the finish line).

The end product is just eight inches in diameter and five inches long, but can deliver 175 horsepower and 97 per cent efficiency.

The TT Zero is a tough course for electric motorcycles. Performance depends on the amount of energy bikes can carry, rather than what their powertrain can deliver. The prototypes will rely on large batteries to store energy.

US-based strategic account manager at Parker, Kevin Holloway, explains: “Energy storage is the Holy Grail for electric vehicles. Batteries don’t store as much energy as liquid fuel - you need more weight and volume to get an equivalent gallon of energy.”

Parker also uses an internal water-cooling system for the GVM motors. Water extracts more heat than oil, and water systems are easier to deal with than an oil-cooling loop. Parker’s system is designed to reside within the motor diameter, rather than creating a jacket around it; the smaller volume achieved means that the motor has a higher power density.

An unusual feature of the Parker motor is its availability in kit form. That means customers can mount the motor in their own housings. Some manufacturers don’t allow that, and especially with motorcycles, space is at a premium; the extra freedom shows designers what size void is needed to accommodate the motor.

For the TT, Victory Racing designed the canister that the motor sits inside, and Parker populated the canister with its motor. In contrast, the University of Nottingham is also using Parker’s GVM motor for its TT Zero motorcycle, but elected to use Parker’s standard housing instead of designing its own.

On a motorcycle, the motor is the primary instrument to propel the vehicle forward. But the technology also has potential to be used for other applications.

For example, the PMAC has been used for on-vehicle power generation in hybrid vehicles. Typically the motor/generator is connected to the front main belt on an engine to generate electricity, and a second motor uses the power generated to power a traction motor or other equipment (such as auxiliary cooling fans or air conditioning units). The process used to be achieved through a hard drive shaft, but with newer vehicles, the geometry has changed and this approach creates a universal system.

In a very different context, Parker’s motor has also been used to provide electro-hydraulic pumps to operate flight control surfaces on rocket ships.

With electric bike performance improving at a significant rate year-on-year and lots of interest in the prototype bikes, the partnership between Parker and Victory has significant scope for potential.

Further information on the GVM PMAC range is available from Parker's electric and hybrid vehicles web page and details of the Victory electric prototype race bike on Victory's Isle of Man TT web page. Victory Racing will also post regular feeds and pictures from the Isle of Man TT on its website.

To find out more about the uses of Parker’s GVM motor and its application in different markets, please contact Andy-Parker Bates on 01926 317878 or andy.parker-bates@parker.com.

Parker's GVM motor, as seen on the Victory Racing bikes at this year's Isle of Man TT Zero

With annual sales of $13 billion USD in fiscal year 2014, Parker Hannifin is the world’s leading diversified manufacturer of motion and control technologies and systems, providing precision-engineered solutions for a wide variety of mobile, industrial and aerospace markets. The company employs approximately 57,500 people in 50 countries around the world.

Victory Motorcycles designs, engineers, manufactures and markets a full line of cruisers, baggers and touring motorcycles. Every Victory model delivers industry-leading performance, comfort, style, storage and reliability. The first Victory was produced on the Fourth of July, 1998, in Spirit Lake, Iowa, where every Victory motorcycle continues to be produced today. Information about Victory apparel and accessories is available on the Victory Motorcycles website and the Victory Facebook page.