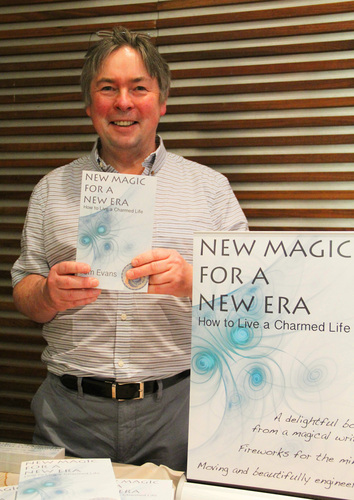 The event was a great success, and it was a pleasure to launch my book alongside such talented and exciting authors

The other nine winners are Eve Makis (The Spice Box Letters), Steve Tasane (Nobody Saw No One), Daphne Kapsali (100 Days of Solitude), Diana Morgan-Hill (Love & Justice), Janet Denny (The Man on the Mantelpiece), Andrew Symeou (Extradited), Amanda Epe (A Fly Girl), Nicola Mortimer (Adventures to Have Before…) and Andrew Lowe (The Ghost).

As well as being an author, Tom is a speaker, author’s mentor and meditation expert. He created the world’s first time management system based on mindfulness and hosts a successful podcast called The Zone Show.

Tom said, “The event was a great success, and it was a pleasure to launch my book alongside such talented and exciting authors.

“New Magic for a New Era is a departure from the themes explored in my other books because it is the first in which I tell my story.

So how did the book New Magic for a New Era come about?

Tom Evans was born and raised in Moss Side, Manchester, one of seven children. After attending grammar school, he went on to get a degree in Electronic Engineering at Birmingham University and work at BBC Manchester, Oxford Road. In 1983, Tom moved to London and built his own broadcasting service and equipment manufacturing company, which he sold in his mid-thirties before building a successful ecommerce business. He has been living in the Surrey Hills for 20 years where he writes and runs his business mentoring and assisting other authors.

What’s so remarkable about the One Big Book Launch is that it’s in exactly the same building that Tom launched his broadcast manufacturing company in over 30 years ago, after leaving the BBC. Read more in this blog.