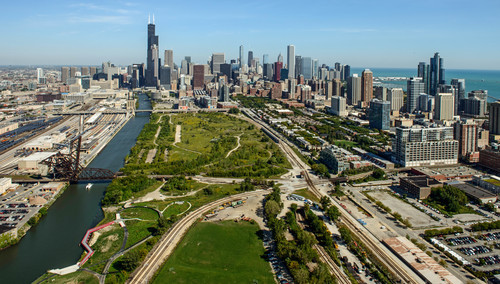 Plans are moving forward for the construction of an inspiring new riverside complex in Chicago’s South Loop area, on one of the biggest vacant tracts of land in Illinois’ most populous city.

Companies of the General Mediterranean Holding group, a multi-national conglomerate based in Luxembourg, are joining forces with a Chicago-based developer to master-plan the 62-acre (25 hectare) South Loop site that runs along the Chicago River. The prime piece of real estate is big enough for a mixed-use project that could include several thousand homes and a major shopping centre along Roosevelt, the South Loop's main retail strip.

“We are set to appeal the decision,” said the representative. “General Mediterranean Holding inherited a dispute which is based on an already existing conflict between third parties and in which it has no involvement. A group of this size and reputation sometimes faces difficulties such as this, but we have a highly competent legal team in place and are confident that our reputation will be upheld. It in any case will not affect the prestigious South Loop development project, which is moving ahead at a good pace.”

The next move for General Mediterranean Holding will be either an appeal or a request for a retrial, confirms a spokesman for Katten Muchin Rosenman LLP, the group’s lawyers in Chicago. The firm maintains that its client has acted appropriately and will continue to pursue the proper remedies, noting that the judge in this case has already thrown out a fraud claim against General Mediterranean Holding.