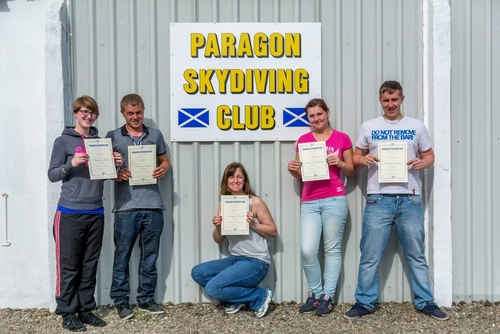 The skydive was absolutely terrifying, but it is all for a great cause!

The sisters were joined by Allana’s partner Aaron Ross and his mother Yvonne Ross, and Jasmine’s partner Graeme Anderson, all from Aberdeen.

Allana’s mother, Karen Massie, was diagnosed with vasculitis in January of this year, and the sisters decided to raise money for the Foundation and awareness of this little-known condition by skydiving.

22 year-old Allana said, “When my mum was diagnosed with vasculitis, we were especially shocked because we hadn’t ever heard of the condition before – that’s why we’ve decided to raise awareness by jumping out of a plane.

“The doctors advised us to get in contact with the Lauren Currie Twilight Foundation, whose help and support has been invaluable to us.

“The skydive was absolutely terrifying, but it is all for a great cause!”

Grant Currie said, “We can’t thank Allana, Jasmine and the team enough for undertaking such a feat in support of the Lauren Currie Twilight Foundation.

“Without fundraisers and the generous people who donate we wouldn’t be able to help nearly as many vasculitis suffers, so this sort of support is really vital to us.”

Dr Hilary Jones, patron of The Lauren Currie Twilight Foundation, has featured in a video explaining the condition, which can be found here.

The charity’s next big event is the Black & Red Vasculitis Charity Ball at the Thistle Hotel, Glasgow on Friday 18 September 2015.

The ball, which will include an exclusive performance from X Factor winner Shane Ward, has been held annually since 2011 and has raised over £300,000 for the Lauren Currie Twilight Foundation in that time.

We would be delighted to arrange interviews with Grant Currie or Allana Massie.