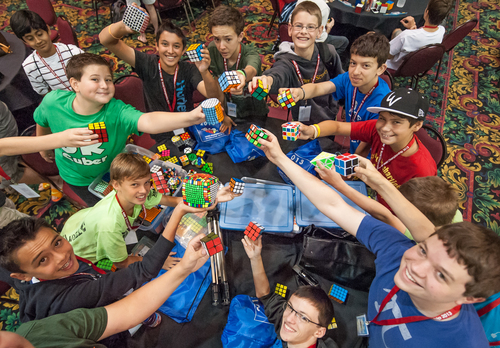 There is a wide range of categories – for example, some people complete the puzzle blindfolded or with their feet!

Brazilians are no strangers to world-class competitions; they hosted the football World Cup in 2014 and are readying themselves for the Olympics in 2016. From Friday July 17 to Sunday July 19 they will host the Rubik’s Cube World Championship, a biannual event that attracts hundreds of the world’s fastest Cubers. It takes place at Colégio Etapa, Rua Vergueiro, Vila Mariana, São Paulo, from 9AM to 6PM on Friday and Saturday and 9AM until 5PM on Sunday.

Two years ago in Las Vegas, Australia’s Feliks Zemdegs stunned the competition, solving the Rubik’s Cube with a winning average time of 8.18 seconds, and he will be in attendance at São Paulo, looking to defend his title.

Competitors solve the Rubik’s Cube five times. The fastest and slowest attempts are removed and an average time is taken so it’s not always the fastest single solve that wins the competition.

The world record for a Single Solve is 5.25 seconds, set by American Collin Burns in April 2015.

“The truth is that it’s not just about the competition – it’s a social weekend where participants can meet friends, share tips and watch the fastest Cubers in the world compete.

“There is a wide range of categories – for example, some people complete the puzzle blindfolded or with their feet!”

Erno Rubik, the inventor of the world’s best-selling toy, said, “I first made the Rubik’s Cube when I was a Professor of Architecture, to get my students to think spatially. Who’d have thought that 41 years later, several hundred young-at-heart fans would be competing in São Paulo? It shows that the challenge of completing the Cube is a timeless one!”

There are 18 different events at the 2015 Rubik’s Cube World Championship including:

The highlight of the competition is the 3 x 3 x 3 final, which starts at 4.15PM (São Paulo local time) on Sunday July 19. The championships will be streamed live from the start of the competition and can be viewed via http://cubovelocidade.com.br/worlds/ .

Since then there have been six World Championships and it is now held biannually, attracting more than 400 competitors. See below a list of contenders to watch at this year’s event and their personal best times:

Alternatively, join the conversation at #RubiksCube.

Images and B-roll from the 2013 Rubik’s Cube World Championship are available on request. We would be delighted to organise interviews with Chrisi Trussell from Rubik’s Brand Ltd.

Images and B-roll from the 2015 Rubik’s Cube World Championship will be available to journalists when the event is under way.

We have a limited number of Rubik’s Cubes for distribution to journalists, so let us know if you’d like one.

WHAT: Rubik’s Cube World Championship 2015
WHO: 426 competitors from across the world (full list of competitors)
WHEN: July 17-19 2015
WHERE: Colégio Etapa, Rua Vergueiro, Vila Mariana, São Paulo