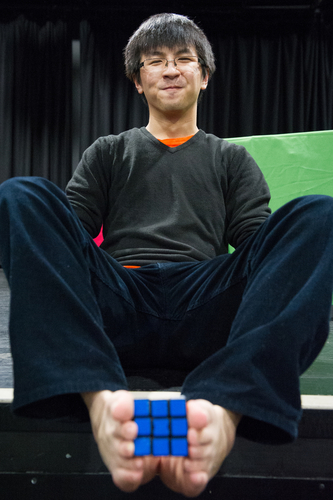 We know that there are a few Cubers in Brazil who are at the very top level, but we haven’t had the chance to compete against them yet

Speedcubing is the sport of solving a Rubik’s Cube in the fastest possible time, and elite Cubers can do this in a matter of seconds.

At the 2013 Rubik’s Cube World Championship, Australia’s Feliks Zemdegs stunned the competition, solving the Rubik’s Cube with a winning average time of 8.18 seconds, and he will be in attendance at São Paulo, looking to defend his title.

The UK is also very well represented on the world Speedcubing stage: in 2009 Paisley, Scotland-based Breandan Vallance won the Rubik’s Cube World Championship in Dusseldorf with an average time of 10.74 seconds, and achieved a new best average time of 8.32 at the 2013 Edinburgh Open, placing himself comfortably among the global Speedcubing elite.

Daniel Sheppard, also from Guildford, is on their heels with a personal best average of 10.48 seconds and will be looking to make an impact at this year’s event.

Competitors solve the Rubik’s Cube five times. The fastest and slowest attempts are removed and an average time is taken so it’s not always the fastest single solve that wins the competition.

Erno Rubik, who celebrates his 71st birthday today, created the Rubik’s Cube in Budapest in 1974 and it has since become the world’s best-selling toy with over 400 million sold

Speaking ahead of the event, Breandan Vallance said, “Speedcubing has taken me around the world - I’ve been lucky enough to visit a lot of exotic places and meet a lot of great people.

“What’s especially exciting about the 2015 Rubik’s Cube World Championship is that it is taking place in South America for the first time.

“We know that there are a few Cubers in Brazil who are at the very top level, but we haven’t had the chance to compete against them yet.

“If they are as good with a Rubik’s Cube as they are with a football, we might be in trouble!”

The event attracts over 400 competitors and there will be 18 different events at the 2015 Rubik’s Cube World Championship, including:

The highlight of the competition is the 3 x 3 x 3 final, which starts at 4.15PM (São Paulo local time) on Sunday July 19. The championship will be streamed live from the start of the competition and can be viewed via http://cubovelocidade.com.br/worlds/

Alternatively, join the conversation at #RubiksCube

Images and B-roll from the 2013 Rubik’s Cube World Championship are available on request. We would be delighted to organise interviews with Chrisi Trussell from Rubik’s Brand Ltd.

Images and B-roll from the 2015 Rubik’s Cube World Championship will be available to journalists when the event is under way.


WHAT: Rubik’s Cube World Championship 2015
WHO: 426 competitors from across the world (full list of competitors)
WHEN: July 17-19 2015
WHERE: Colégio Etapa, Rua Vergueiro, Vila Mariana, São Paulo