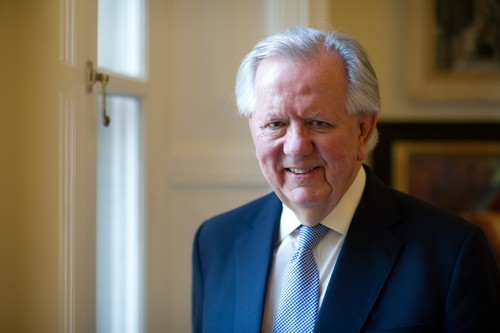 Steve Norris’ appointment comes just as the company announces its first major international contract, guarding the Pacific port of Lazaro Cardenas in Mexico. With UK trade with Mexico set to double to £4.2 billion in 2015, it is an opportune time for the Abbey Grey Security Group to begin working with the country’s oil and gas industry.
The firm has just opened its offices in the World Trade Centre in central Mexico City.

It is one of very few UK companies to be operating in the Mexican market and Derek Horne has been invited by London’s UKTI organisation to give a presentation to help offer guidance to other companies looking to expand into Mexico and Latin America. Derek Horne has also been invited to attend a forthcoming trade mission to Mexico City in September.

At such a crucial time in the development and expansion of the Abbey Grey Security Group, the operations and logistics experience of Steve Norris will be vital. Between 1992 and 1996 he was Minister for Transport, with a responsibility for all London transport. He was responsible for the Jubilee Line Extension, which is to date the largest extension that the London Underground has seen.

Speaking about his enthusiasm about the role, Steve said, “The Abbey Grey Security Group is ahead of the trend in Mexico and it won’t be long until companies start to realise the tremendous potential in the market.

“That’s just part of what makes this such an exciting opportunity, the other reason being that the company is really looking to shake up the security industry by offering a bespoke service that is unparalleled by its competitors.”

CEO Derek Horne, who has 15 years of specialised military experience including four years in the British SAS, is thrilled to have Steve on board: “Steve’s background in logistics and operations, combined with his knowledge of business and politics, makes him the perfect candidate for Chairman.

“We’re looking forward to making use of Steve’s extensive business experience and expert knowledge. Our services are aimed at global international corporate clients and Steve will make sure that we are truly focused in order to achieve our aims.”

Photos of Steve Norris are available.

The Abbey Grey Security Group is one of the leading global providers of risk solutions. It helps clients make confident risk management decisions about people, assets, operations and security.

Abbey Grey Security Group specialises in identifying, remediating and monitoring risk across enterprises. It addresses each client issue with a unique team tailored to the situation.

With the strength of staff in many countries, the Abbey Grey Security Group can provide clients with a single point of reference for the provision of all security, risk management, specialised training and logistic services.

Its clients, who operate in remote or hostile environments, have recognised the effectiveness of dealing with one company capable of addressing all these special needs and appreciate this ‘all in one’ capability.