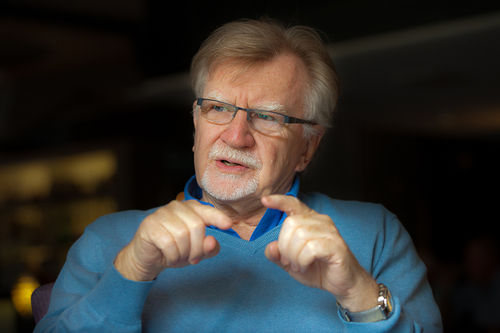 Today, August 11 2015, will see The Zone Show – the popular podcast hosted by author, inspirer and mindfulness expert Tom Evans – reach over 60,000 listeners. The show is recorded in Tom’s home office in the Surrey Hills, UK from where he interviews guests all over the world over Skype.

The podcast which helped the show to reach its 60,000th listener was with author and free thinker, Richard Barrett. Richard is the founder and chairman of the Barrett Values Centre and has just published his latest book, The Metrics of Human Consciousness.

Tom Evans said, “It was great to have Richard on for such a milestone in The Zone Show’s history. Hearing him explain his concepts and work was fantastically interesting.

“I’m also delighted with the number of listens that The Zone Show has got. It really is a testament to guests such as Richard, who I would love to have back on the show soon!”

In the podcast, Tom Evans explores the nature of consciousness with Richard Barrett and discovers ways we can assess our level of evolution.

As Richard Barrett explains, “The Metrics of Human Consciousness explains a way of measuring consciousness by mapping values to a scale which I have called the Seven Levels of Consciousness, a model loosely based upon Maslow’s Hierarchy of Needs.

“A person’s level of consciousness corresponds to their psychological development. The more basic stages are linked with survival, safety and security, whereas the more advanced levels refer to individuation, self-actualisation, collaboration and service.”

Richard’s model also allows an organisation or nation to measure its ‘cultural entropy’, the degree of dysfunction or the difference between the values that individuals perceive in their society and the values that they would like it to exhibit.

The Barrett Values Centre has mapped the values of over 6,000 companies 26 countries around the world. In the podcast, Richard touched on a recent project in Singapore: “Just last week, for the second time, we mapped the values of Singapore. My partner Phil Clothier, who is the CEO of my company, was out there and the publicity of the Values Assessment of Singapore got was absolutely amazing!”

On the Barrett Values Centre website a free Personal Value Assessment (PVA) is available. This allows users to pinpoint their own level of consciousness in much the same way that the Barret Values Centre measures the values of companies and nations.

There have now been 144 episodes of The Zone Show since Autumn 2013, and it has garnered a substantial fan base with listeners in far-flung countries such as Afghanistan, Australia, Brazil, Finland and Hawaii and is syndicated for download via Apple iTunes, Stitcher, Tunein and Mixcloud.

He hosts the popular podcast The Zone Show, which explores the way in which we get into, and stay in, ‘the zone’ and has written a book on the subject: The Zone: How to Get in It and Stay in It.

Richard Barrett is an author and the founder and chairman of the Barrett Values Centre.