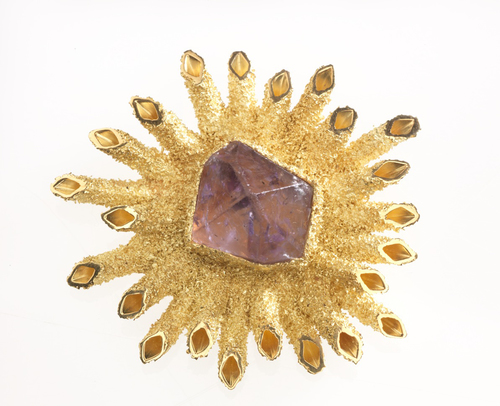 John Donald, goldsmith and jeweller launches his autobiography, ‘Precious Statements’ this October. This lavishly illustrated book is the first concentrating on the career of one of the most innovative jewellers of the twentieth century. Introduced by Joanna Hardy, the international fine jeweller specialist, portrait photography by Mary McCartney, and published by McNidder & Grace, it makes the perfect Christmas present for collectors and followers of fashion.

Experimenting with molten gold in water, John Donald created myriad fascinating shapes with which to work. From this initial research came his famous ‘crown’ design, which marked a complete departure from any previous jewellery concept. The stones were set on very fine wires, all at different levels within the textured goldwork of the crown, creating a three-dimensional effect.

John Donald is one of the most innovative jewellers of the Twentieth Century and was a firm favourite of H.R.H. Princess Margaret. His designs and techniques continue to influence contemporary designers and he has been active in offering over one hundred apprentices both the opportunity of working with a master and hands-on guidance in the industry. John has also advised on panels in design colleges and committees.

His work can be seen in the collections of The Worshipful Company of Goldsmiths, The Victoria and Albert Museum, The Royal Museum of Edinburgh, The Schmuckmuseum in Pforzheim, various Royal Families as well as Heads of Industry and those fascinated by design.
www.johndonald.com

The 1960s heralded a wave of change, a new freedom of spirit, epitomised in contemporary jewellery design by the arrival of the man who was going to revolutionise the traditional image of gold jewellery and pave the way for a more fluid construction.

With the advent of a more prosperous era, John Donald’s designs were Baroque in mood and essentially organic in form. Luxurious gold was twinned with exotic crystal demonstrating two of the most notable trademarks of John Donald’s work from this period, which are still prevalent today. His predilection for uncut precious stones and natural crystal together with the fact that his goldwork echoes the striations found in the natural world, came to represent the quintessential John Donald.

A celebration of the innovative work of this leading jewellery designer reveals that John Donald has bequeathed a rich design heritage to the precious jewellery arena. The continued success and demand for individual commissions also illustrates that the ethos behind John Donald’s designs remains as relevant today as when he moved into his first studio in a converted mews in Bayswater over fifty years ago.