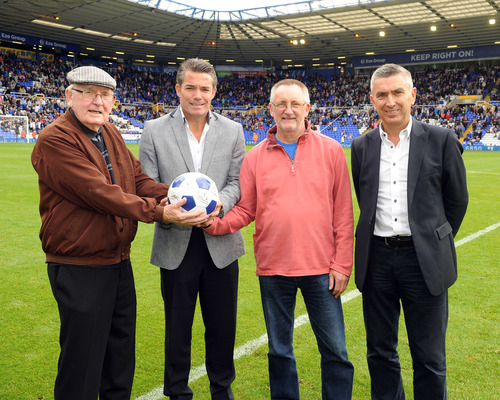 Thanks to Eze Group’s Eze Wishes campaign, volunteers from the support charity attended the match where they were also presented with a signed match ball to be raffled by the organisation to raise much needed funds.

Alzheimer’s Society believe passionately that life doesn’t end when dementia begins. The charity offers support for anyone affected by dementia and do everything possible to keep people with dementia connected to their lives and the people who matter most.

The charity is able to do this by offering a range of one to one and group services to people with dementia, their families and carers.

“We can’t thank Eze Group enough for choosing our charity to win an Eze Wish, and hope that by raising our profile our services reach out to even more people within the community.”

The EZE Wishes by EZE Group initiative is designed to recognise and reward charitable groups and voluntary organisations in the Birmingham area by providing complimentary seats at St Andrew’s and a signed match-ball for fundraising.

CEO of EZE Group Dominic O’Reilly added: “Birmingham and Solihull Alzheimer’s Society were chosen to receive an EZE Wish for the invaluable role the charity plays within the community. We’re delighted we could reward its volunteers with tickets to see the game.”

Over the course of the season Blues’ principal partners and main shirt sponsor for the 2015/16 season, EZE Group, is planning to grant further wishes to organisations as a thank you for the invaluable role they play in the local community. Voluntary groups and charities can be nominated by emailing ezewishes@bcfc.com.

EZE Group is the UK’s leading leisure, travel and hospitality provider – your one stop shop for a better lifestyle. Holidays, business travel, attractions, concerts and unique one-off experiences can all be sourced through EZE Group’s dedicated concierge service.