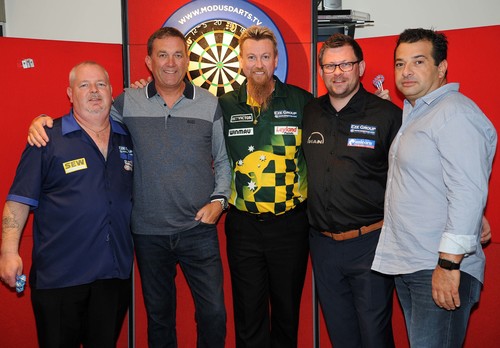 Three of the world’s leading darts players were on target for charity when Blues' shirt sponsors EZE Group hosted a memorable evening at St Andrew’s.

As well as being principal partner and shirt sponsor of Birmingham City FC, EZE Group also sponsors James Wade, Simon Whitlock and Robert Thornton, who are among the world’s top 10 darts players.

EZE Group found a winning formula by working with Blues to put on the celebrity darts night, raising more than £11,500 for the Alzheimer’s Society in the process.

The evening featured a ‘best of five’ 501 competition between the leading darts trio, and members of the audience were also able to bid for the chance to take to the oche and compete against the professionals.

Simon Whitlock – the Wizard - ran out a narrow victor for the inaugural Blues EZE Group title, but the real winner on the night was charity.

Dominic O’Reilly, CEO of EZE Group, said: “We wanted to bring the world of darts and football together and the evening proved a tremendous success.

“By having the event professionally staged we were able to recreate that unique big tournament darts atmosphere at St Andrew’s and supporters gave generously through the auction and raffle to raise over £11,500 for the Alzheimer’s Society.”

The EZE Group Foundation, the company’s charitable arm, uses sports sponsorships to raise much needed funds for worthy local charities and other causes. Over the last three years more than £60,000 has been raised through various initiatives including ground collections, the BCFC Player of the Year Awards and annual golf day.

EZE Group is the UK’s leading leisure, travel and hospitality provider – a one stop shop for a better lifestyle.