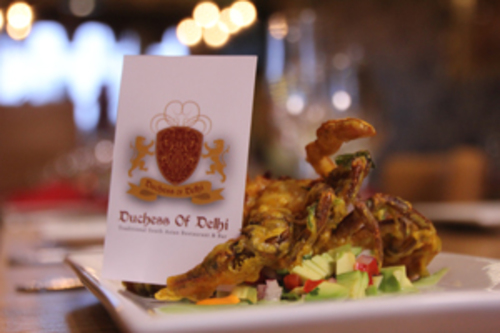 To celebrate National Curry Week and the performances of Half N’ Half, the "Duchess of Delhi in Cardiff Bay will be offering a special menu reminiscent of the seventies and eighties" dishes that solidified Britain’s love of curry. Have a glimpse of the menu

The Muscial coincides with National Curry Week, this is the first ever ‘curry musical’ which opens at the Wales Millennium Centre, Cardiff, in October right opposite the Duchess of Delhi restaurant. The musical created by writer and composer Tim Riley, it’s set in 1987 and takes place in the Taj Mahal, a fictional curry house.

Ali, the boss, is ready to retire to his native Bangladesh, but he faces a difficult dilemma –
who should take over the business? There’s his nephew Khan, from Sylhet, who thinks family should come first: but there’s also Rafiq, the streetwise head waiter who’s worked there for years. But then Mr Bajar arrives; from the Balti King from Birmingham with a taste for a takeover. With a forbidden romance blossoming and a hurricane brewing, it looks like Ali could be in real trouble.

Half ‘n’ Half promises to be a musical comedy that explores how we define our identity, and celebrates the unique fusion of British and South Asian cultures in the UK. It’s full of toe-tapping tunes that draw on Western, Bollywood, and South Asian folk music. Tim Riley, who wrote the script and developed the music along with composer and performer Ansuman Biswas.

Both Duchess of Delhi and the curry musical is a great reason to travel to Cardiff Bay!

The special menu is available before the performance of Half ‘N’ Half at the Millennium Centre in Cardiff Bay, and will continue for people to try until the end of October 2015.

Duchess of Delhi a restaurant and bar that serves South Asian cuisine, opened its doors in December 2013, amidst Cardiff Bay’s picturesque waters and popular tourist spots sits a beautiful grade 2 listed building overlooking the Millennium Centre. Formally occupied by a Sea Captain and eventually the Glamorgan Coal Company in 1893, this building has witnessed the area grow from a coal exportation site to an area known as ‘Tiger Bay’. It now tells a very different story, marking the Asian food industry as commonplace in Britain.

“Fantastic menu- you must try the stuffed squid”

Reviewed 4 October 2015
Visited this restaurant with my daughter as a treat for her, she's a student living in Treforest and we visited Cardiff for the day. Have eaten here previously so booked a table for last night. Food once again was amazing, I tried a stuffed squid dish recommended by the manager, it was the best Indian meal I have had since the last time I visited this restaurant in April. I regularly eat Indian food but have yet to find anywhere better than The Duchess.

“Gorgeous Food.”
Reviewed 21 September 2015
Great location on Cardiff Bay, gorgeous food and a lovely atmosphere. Food was very reasonably priced and there was a large choice available. Would definitely recommend