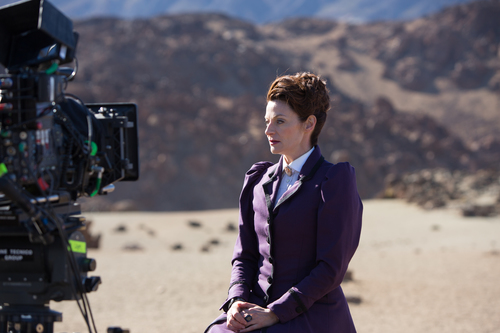 Tenerife’s natural beauty makes it perfect for film, but what’s even more incredible is how many different settings can be found there

Tenerife, an island in the Atlantic – almost 200 miles from the coast of Africa – has recently been the setting for Series Nine of Doctor Who, produced by the BBC and starring Peter Capaldi, Michelle Gomez and Jenna Coleman. The iconic science-fiction programme used the volcanic landscape of Mount Teide to replicate an alien world.

It is not only television companies that have been drawn to Tenerife – the island’s filmography also includes a number of blockbuster films, including Fast & Furious 6 – the 50th highest-grossing film of all time, and the Clash of the Titans and Wrath of the Titans films, which were huge box-office successes.

Currently being filmed is the fifth instalment in the Bourne series, starring Matt Damon. In the film, the Tenerifan capital Santa Cruz de Tenerife stands in for Athens. But what draws these world-renowned productions to such a small island, only slightly larger than Greater London?

In an area of just over 2,000km2 Tenerife has a huge range of potential film settings. Holidaymakers might be aware of the black sand beaches and breathtaking cliffs, but may not have ventured far enough to see deserts, subtropical forests and volcanic areas, and the island’s two UNESCO World Heritage sites: the Teide National Park – containing the world’s third-largest volcano – and San Cristóbal de La Laguna, a colonial city founded at the end of the fifteenth century.

Carlos Alonso, President of Tenerife, and Alberto Bernabé Teja, Councillor of Tourism and International Development, will be holding a working lunch at the Royal Automobile Club, 89 Pall Mall, London SW1Y 5HS at 12 noon on Wednesday 4 November to meet with London-based film, television and commercial production companies and media to discuss Tenerife’s huge potential as a filming location, and the incredibly generous tax incentives on offer.

Sharon Backhouse, Director of London-based company GeoTenerife and event organiser, said, “Tenerife’s natural beauty makes it perfect for film, but what’s even more incredible is how many different settings can be found there. The volcanic peak of Teide looks like the surface of another planet, and to think that within a short drive a production company could be in a unique laurel forest, a desert or beneath breathtaking cliffs is incredible.

“Add to this a charming and well-preserved fifteenth-century city and a wealth of modern architecture, plus one of the most consistently sunny climates in the world.

“Tenerife’s importance to the global film, television and commercial production industries has been cemented in recent years as companies realise the benefits of working on the island. That is why now is an opportune time to meet with industry leaders in London and discuss the ways in which they can take advantage of this unique location with the help of the assistance of the Tenerife Film Commission, which has been valuable to a huge number of productions.”

The Tenerife Film Commission supports all foreign film production projects on the island, giving advice about locations, introducing appropriate local companies to support and much more.

Tenerife’s versatility in terms of filming locations is just one factor that attracts production companies to the island, however:

Although its landscape and weather are unlike those found in Europe, Tenerife’s relative proximity makes it an attractive film destination. Only a two-and-a-half hour flight from Madrid and four hours from other major European cities and with the same time zone as the UK, Ireland and Portugal, it is very close to Europe.

Tenerife has a healthy local film industry. Whether actors, extras, producers or equipment is needed, the Tenerife Film Commission helps to connect foreign production companies with the best local talent.

Having welcomed many film, television and commercial production companies to the island, Tenerife’s government and residents have earned a reputation for being film-friendly. For example, a section of newly-built motorway was made available to the makers of Fast & Furious 6.

Tenerife’s latitude and its position in the Atlantic mean that it enjoys 3,000 hours of sunshine a year (an average of eight hours and fifteen minutes a day) and average temperatures of 23°C. This makes it ideal for outdoor filming.

Tenerife is in the Special Canary Zone, which means that businesses pay 4% corporation tax, compared to a European average of 25%. On top of this, foreign producers can qualify for a 35% tax rebate if they invest at least €1 million in the Canary Islands and hire a local production company.

Tenerife’s hotels are regarded some of the best in Europe, and it has 75,000 beds at three, four and five-star establishments.

Tickets to the London working lunch are free and available but places are strictly limited.