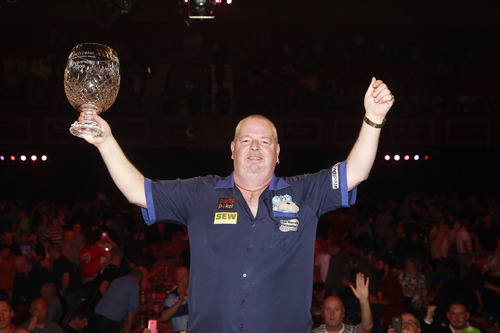 And the former UK Open winner, who moves up the world rankings to fifth, believes the victory was the highlight of his career so far.

“It was the biggest win of my darting life,” ‘The Thorn’ told EZE Group after collecting the prestigious trophy.

“I’m really going to enjoy this moment. Not many players have won one major, let alone more so I’m part of an elite club now and I’m not finished yet.”

Thornton’s win comes at a key time of the year, with several major tournaments taking place ahead of the World Championship, including the Grand Slam of Darts in Wolverhampton – where Thornton was runner-up two years ago, The European Championship in Belgium and the World Series Finals in his native Scotland.

“I’m showing my best form at the right time of the season,” He added. “With a run of big tournaments coming up I hope I can build on this. I feel good and I know I’ll be there or thereabouts.

“Winning the Grand Prix means everything to me. It is one of the biggest events in Darts and hopefully I’ll win a few more big ones yet.”

MODUS is an approved agent of the Professional Darts Corporation. For more information about MODUS visit www.modusdarts.tv

Some facts about professional darts:-
• Darts is the UK’s largest indoor sport and regularly sells out arenas across the country
• Over 100,000 tickets sold for the 2015 Premier League Darts
• It is regarded as one of the best nights out in terms of entertainment as well as a sporting spectacle
• The sport is watched by millions of viewers worldwide
• The Professional Darts Corporation (PDC) have recently announced an increase in prize money to an all-time high of over £8 million annually
• The PDC World Champion wins £250,000 in prize money for winning that tournament alone
• Sky Sports viewing figures for the past two years have seen Premier League Darts and World Championship achieve audiences second only to Premier League football
• Darts will enjoy over 350 hours of live television coverage in 2015
• Darts appeals to a huge audience demographic with men and women of all ages subscribing to watch, attending events and participating in the one of the World’s fastest growing sports