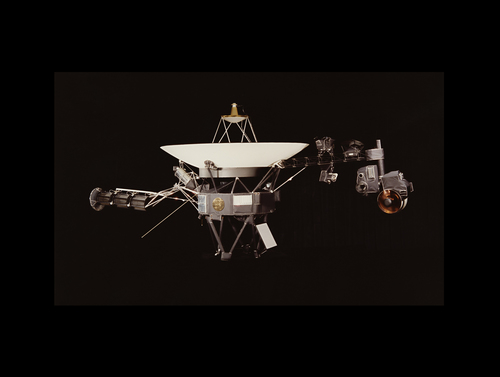 Christopher Riley, film director/producer and Professor of Science and Media at the University of Lincoln’s School of Film & Media, is launching a global public call to action on Facebook www.facebook.com/voyagersfinalmessage. He wants to crowd source a short final message which he will invite NASA to send to the future by uploading it to the memory banks of their Voyager 1 and 2 space probes.

Both Voyager 1 and 2 carry a copy of a Golden Record, which contains music, greetings, sounds and even pictures encoded onto them, with the aim of communicating something of human culture to any extra-terrestrial civilization, which might one day encounter them.

Christopher Riley says: “I’ve always been enchanted by the Voyagers’ extraordinary Golden Record. Physically bolted to the side of each spacecraft this time capsule is perhaps the most remarkable monument to the human race ever created. But before we lose contact with the Voyagers, wouldn’t it be fantastic to add one final digital message from planet Earth to the computer memories of each spacecraft, to accompany it.”

The ‘Voyagers Final Message’ Facebook campaign is collecting messages from the public, with the hope of persuading NASA to select one to upload to each spacecraft before contact is lost.

The final message will need to be beamed to the twin Voyager spacecraft before their onboard electrical power runs out in the mid 2020s. Out of power, the two probes will carry on; eventually escaping the Solar System to drift through the Galaxy for another billion years.

Christopher Riley says: “There’s really no reason why such a message can’t be written by an impartial representative from the human race, so we’re inviting suggestions from anyone who would like to contribute a thought.”

The Facebook app celebrates the Voyager 1 and 2 space probes, and includes information about the Voyager missions, encouraging people to write their own ‘final message’ up to 1000 characters long (about the length of seven tweets). Each message submitted will automatically add the senders details to a petition database, which will be presented to NASA in the year 2020.

Christopher Riley says: “I believe our Facebook campaign embraces the same spirit that the original Golden Records were created in; focusing us to consider what we’d like to say about our civilization to another intelligent technological society in the Galaxy. It’s never been easier to canvass opinion on what such a message should say. Facebook’s feels like a great way to collect such suggestions from a broad cross section of our society.”

To get the ball rolling Christopher Riley’s written his own suggested 1000 character message below:

Over 40 years after leaving Earth this spacecraft named Voyager had broken into interstellar space, 20 billion kilometers from its home planet, & was still powered
& collecting useful data. During this time our society had changed significantly, its population doubling to over 7 billion, & the challenges of living sustainably & peacefully together had grown more urgent. Our technologies had also become increasingly digital, raising our computing capability, pushing the frontiers of our knowledge faster & accelerating our development as a single, interconnected global civilization; with all the advantages and problems that this brings. With onboard power dwindling, the uploading of this message is one of the last contacts we will have with this spacecraft. We hope that one day, in finding our Voyager, you will know of our existence & our desire, like yours, to explore & better understand this Universe we have shared with you. With peace & hope from the people of planet Earth.
Dec 2023.
# # #

For further information about Christopher Riley contact Rufus Stone at Swee: rufus.stone@swee.co.uk or +44 (0)7473 226221

1. The Voyager spacecraft were dispatched from Earth in 1977, flying past the outer planets over the next 12 years before leaving the Solar System to eventually enter interstellar space. Voyager 1 crossed this milestone in August 2012. It is thought that Voyager 2 will also cross this boundary in the coming years.

2. Voyager 2 is the fastest traveling spacecraft, covering more than half a billion kilometers each year. It will take something like 18,000 years to reach the extraordinary milestone distance of one light year from the Sun. In about 296,000 years, it will pass 4.3 light-years (40 trillion km) from the Dog Star Sirius, the brightest star in our sky.

Voyager 1 will reach the Oort Cloud – a sphere of rock and ice fragments gravitationally bound to the Sun - in about 300 years. It will take about 30,000 years to pass through it. Ten thousand years after this, it will pass within 1.6 light-years (14.9 trillion km) of the star Gliese 445; which at present is in the constellation of Camelopardalis.

3. Christopher Riley’s interest in Voyager began as a child. He was 10 years old when the two craft were launched, and their flybys of all the giant planets in the Solar System accompanied him through his teenage years. He used Voyager imagery of the moons of Uranus for his undergraduate studies in applied geology at The University of Leicester in the 1980s.

4. Christopher Riley studied for his Ph.D., using Space Shuttle data to map a mountain range in the South of Spain, at Imperial College, London in the 1990s, before joining the BBC’s science department, where he garnered over 100 programme credits. He is currently visiting professor of science and media at the University of Lincoln’s School of Film and Media.

5. Christopher Riley produced and directed the BBC’s acclaimed documentary ‘Voyager – to the final frontier’ which was first broadcast on BBC FOUR in 2012, and has been repeated regularly since. It was nominated for a British Science Writer’s Award in 2013.

6. Christopher Riley’s most recent book for Haynes – an owner’s workshop manual for Voyager 1 & 2 was published in 2015, to celebrate the Voyager Missions’ extraordinary contribution to space exploration over the past 40 years.

For further information about Christopher Riley contact Rufus Stone at Swee: rufus.stone@swee.co.uk or +44 (0)7473 226221