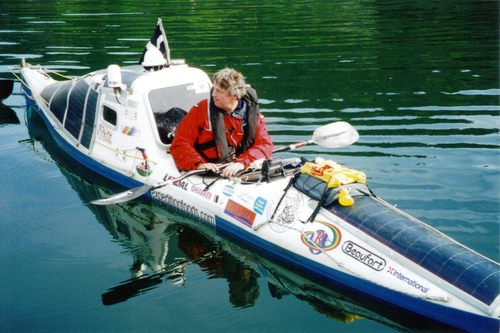 ‘Stress Management with a Difference’ – an evening with Peter Bray

It’s difficult to think of anyone better qualified to talk about stress than Truro-based Peter Bray, a man who served for fifteen years in 22 SAS and became the first person to kayak the North Atlantic from Newfoundland to Ireland, solo and unsupported.

Peter’s experiences have given him a unique insight into stress, which he will be sharing at Health and Wellbeing Innovation Centre, Treliske, Truro, Cornwall TR1 3FF at 7PM. Although there is no charge for the event, in order to avoid disappointment please register by calling HWIC on 01872 330030 or emailing HWICEvents@plymouth.ac.uk.

Peter has been a close protection officer in some of the world’s most hostile locations, including Afghanistan, Iraq and Somalia. His credentials for working in these areas were 24 years spent in the British military, the last 15 years of which were in the famous 22 Special Air Service.

He is also an adventurer, having taken on the challenges of the world’s most dangerous oceans and survived to tell the tale. These life-threatening experiences have equipped Peter with strategies and approaches for handling stress, borne out of real-life situations.

Speaking about his experience, Peter said, “One key way to deal with stress is preparation – in the military, our training and experience meant that we were able to deal with extremely dangerous situations.

“Take road rage, for example - it is a form of stress that is caused by people failing to leave enough time for their journey. If everyone made allowances for traffic when planning their journeys, I’m sure we’d have much less road rage.”

Alone and drifting in the icy waters of the North Atlantic

“After four years planning and preparation I set off to paddle a kayak solo and unsupported from Newfoundland to Southern Ireland. This had never been done, so there was no template.

“I set out on 22 June 2000 at 2000 hours (8PM) to become the first person to complete this challenge. Again, to cut a long story short, I ended up in a life raft which had a four inch tear in the bottom and spent 37 hours pumping out icy water before being rescued. All I had to wear was a very long fleece shirt to keep me warm, along with a dodgy hat! I also had one day/night flare.

“If a task is broken down into smaller sections, it immediately becomes more manageable. This simple technique works just as well for tight deadlines or revision as it does for cross-Atlantic expeditions.

“What kept me going, and how I survived both mentally and physically, will be heard during the presentation. I will also be selling signed copies of my book Kayak Across the Atlantic, which tells the story of how I became the first person to successfully cross the North Atlantic solo and unsupported.”