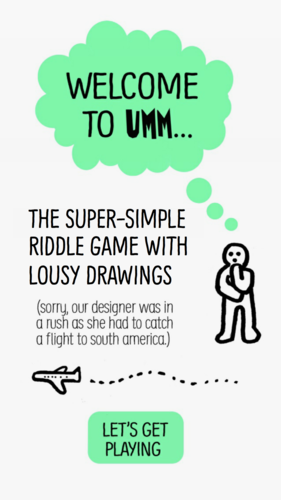 Play starts off easily and gets trickier as players progress. There are 40 different levels in the free version and over 250 extra levels in the paid

Big Potato, the independent games company behind Bucket of Doom, Obama Llama, Mr Lister and Qwordie, is launching a brand new app – ‘Umm: The Word Game’. Available from 18 December 2015, there are free and paid-for versions of the app, which supports any iOS devices running 6.0 or later and any Android devices running 2.3.3 or later.

You’re staring at four terrible doodles, trying to figure out who the famous fictional character is. You’ve got a baseball cap, the number 10, a jack-in-the-box and a sparrow. You’ve umm-ed and you’ve ahh-ed, when suddenly you crack it — Cap-ten Jack Sparrow.

Big Potato’s Dean Tempest comments, “A few months ago, we sat our designer down in a café across the road with the aim to create a word game using only hand drawn puzzles. The only problem was that the puzzles became too easy — our artist was just too good at doodling. About to scrap the idea, we had a sudden change of plan. We revisited the café, this time with a stopwatch. We shouted out random groups of objects, which our designer had to draw in 30 seconds; no re-dos, no preparation. The result: lots of scrap paper, lots of swearing and some very ‘interesting’ doodles.”

In Umm: The Word Game, there are six categories: celebrities, fictional characters, movies, bands, books and food. Play starts off easily and gets trickier as players progress. There are 40 different levels in the free version and over 250 extra levels in the paid version (£1.49). The supporting website www.theummapp.com features an further information, a promo video and the world’s first Umm-maker, where players can create and submit their own rubbishly-drawn riddles to bamboozle their friends. If they are funny and badly-drawn enough they might even star in the next app update.

Big Potato is an independent developer and distributor of both on-screen and off-screen games. For further information about their range, visit www.bigpotato.co.uk