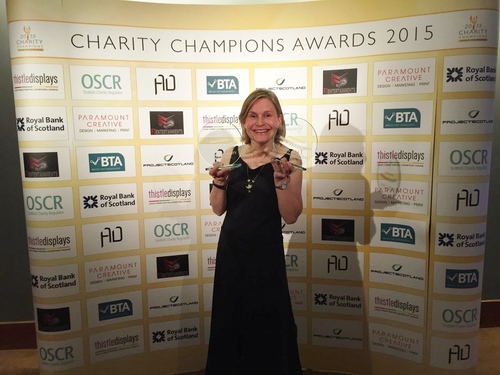 East Lothian-based charity the Teapot Trust, which provides hospital-based art therapy to children with chronic illnesses, has received two awards at the Charity Champions Awards: Charity of The Year (income under £250,000) and Children’s Charity of The Year.

This is the latest of many awards and recognitions that the charity has received this year – Laura and John Young, co-founders of the Trust, were named Points of Light by David Cameron in June and Laura was given an honorary doctorate from Queen Margaret University, Edinburgh in July.

Renowned Scottish artist and playwright John Byrne also donated his painting ‘West of 8th’ to the charity, which was auctioned by Lyon & Turnbull for a staggering £20,000 in in December.

Laura Young said, “It’s great to have the hard work of the whole team recognised, and the Charity Champions Awards we’ve been given provide us with a foundation to achieve even more in 2016.

“Our operations are steadily expanding and although we are incredibly proud of what we’ve achieved in 2015 we want to place more art therapists in hospitals further afield to help more sick children next year.”

Laura and John founded the Teapot Trust in 2010 after seeing the gaps in the care of their daughter Verity, who suffered from Lupus (Systemic Lupus Erythematosus) and also cancer before her tragic death in 2009.

The Teapot Trust provides art therapy in medical settings for children with chronic illnesses. Laura said, “Art therapy is a powerful tool and makes a huge difference to the lives of chronically ill children.

“One of the most difficult things for many children is expressing themselves verbally – the great thing about art therapy is that it provides an alternative medium of communication.

“This builds confidence, which helps children cope with their conditions.

“If children are worried about being in hospital, or for example frightened of needles, art therapy can also be used to help them to relax.”

Since its inception the charity has experienced rapid growth and is now working in seven Scottish towns and cities: Edinburgh, Glasgow, Inverness, Dundee, Aberdeen, Kirkcaldy and Melrose, plus Great Ormond Street Hospital in London.

The main focus of 2016 for the charity is to continue providing its current services and fundraise for a programme of research. It also hopes to begin one-on-one work in the Borders and begin a group art therapy session in the outpatients department of St John’s Hospital, West Lothian.

It receives no statutory funding and, with little confirmed year-on-year income and no investments, relies completely on donations to continue its operations.

Long term health problems can cause anxiety, anger or upset for children and their families and may be difficult to talk about. Art therapy has been shown to reduce anxiety in clinics and before blood tests as children don’t always have the words to describe how they feel. Making art often gives them the ability to share worries non-verbally, helping children gain confidence, feel more in control and cope with their condition.

All of the Trust’s art therapists are clinically qualified with postgraduate-level training and extensive experience of working with children. They are registered with the Health and Care Professions Council and the British Association of Art Therapists.

The Teapot Trust runs up to three art therapy projects a day and currently works alongside other medical professionals in the following locations:

The Teapot Trust has exciting plans for further development across the UK in the future.