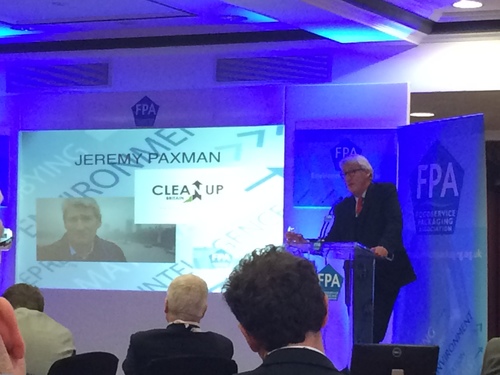 Jeremy Paxman, speaking in Solihull at the FPA annual Environment Seminar, set tone for the litter agenda in 2016 by calling on the whole supply chain to take action to tackle the UK’s litter crisis or face legislative action.

The ex BBC Newsnight anchor, speaking in his capacity as Patron of the litter campaigning organisation Clean Up Britain (CLUB) said that the UK is at a tipping point in attitudes to litter and that businesses need to collaborate to take action and tackle the problem. Litter is rising up the English political agenda and, as politicians like to get on the bandwagon, businesses need to start acting differently to seize the initiative before government forces action through taxes and legislative changes.

Paxman said he, like many citizens, is sick to the back teeth of the state of this country – it makes him depressed and ashamed and it’s time we did something about it.

(He pointed out that even in an area like Solihull the council spends £10k a year on removing chewing gum.)

Addressing the audience of foodservice packaging manufacturers and distributors, foodservice operators such McDonalds, Sodexo and Costa, waste processors and consultants, Paxman said the £1bn spent by the UK each year on cleaning up litter was a waste of everyone’s money. He acknowledged that the foodservice sector is not responsible for litter per se - people drop litter - but he said that if the streets are lined with rubbish with corporate logos on those corporates have a problem that undoubtedly impacts the bottom line by up to 2% according Bradford University School of Management*. Those businesses therefore have a responsibility to get involved with their consumers and take action on litter.

Paxman identified the biggest challenge is changing consumer behaviour by making dumping litter just as socially unacceptable as drink driving. We now live in an ‘on the move’ society that needs portable food and drink. He said that the reason people throw litter out of car windows is that they don’t want it in their personal space - what they fail to realise is that their actions make our shared spaces filthy.

He urged stakeholders to work together to win the war on litter, organisations working alone will never achieve the step-change required to rid the UK of the scourge of litter. With government resources under pressure, he said that this effort needs to be privately funded and needs to engage with young people fundamentally to change attitudes and behaviours.

Paxman concluded: “It’s our country – but it’s filthy. We need to act quickly and decisively and we at CLUB - and you - need to be prepared to make this is happen. “

Issued on behalf of the FPA by Leapfrog PR. Editorial contact is Felicity Read on 01242 282000 or email felicity@leapfrogpr.com