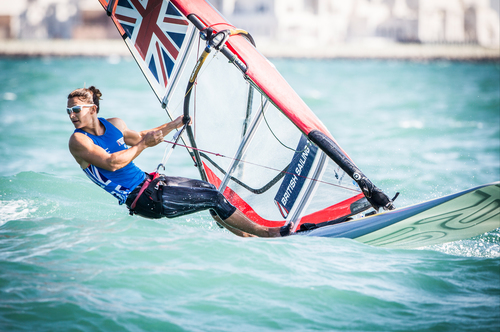 Bryony had a hugely successful year in 2015, winning gold at the European championships, silver at the World championships and being named as part of Team GB for the 2016 Rio de Janeiro Olympic Games .

Bryony Shaw, who was born in Wandsworth, London and now lives in Weymouth, Dorset also won a bronze medal in the 2008 Beijing games which was the first windsurfing medal for the British Women’s windsurfing Olympic team.

Although Bryony finished within the top ten at London 2012, leaving medal-less has driven her even more towards winning the gold medal at the Olympic Games this summer.

Alongside Bryony’s training for Rio 2016, she is an ambassador for the charity Watersports 4 Cancer Research and the Andrew Simpson Sailing Foundation that aims to transform the lives of young people through sailing.

Looking forward to the Olympic year, Bryony spoke of her delight of signing with MOT Models, “Working with MOT models is a fantastic opportunity for me to get involved in some high profile sporting and commercial campaigns, especially in the run up to the Olympic Games this summer. Although my training schedule will be hectic I’m really looking forward to this new experience!”

Alison Griffin, a Director of MOT Models, said, “We’re delighted to have Olympic windsurfer, Bryony Shaw on board at MOT Models, in our Sports Personalities division. Bryony is looking in great shape for Rio 2016 and will undoubtedly be in high demand in both the lead up to and following the Games.”

The agency, which was founded in 1985, prides itself on its strong, positive, nurturing relationships with both models and advertising clients. They typically serve the commercial market, namely high profile campaigns for brands including Axe (Lynx), Body Shop, Esprit, Galaxy, Samsung, Seksy and Vertu.

1983 Born 28 April in Wandsworth, London
1999 Age 16 wins first National Windsurfing title
2001 Spends two years on the world tour as a full time professional athlete
2002 11th at Senior World Championship
2005 After her first year studying Architecture at Cardiff University, she returns to being a full time professional athlete
2006 Wins Silver at the European Championship in Cesme, Turkey
2007 Wins Gold at the Olympic Test Event in Qingdao, China and is selected for the Team GB squad for the Beijing Olympic Games in 2008.
2008 Wins Olympic Bronze in Beijing Olympic Games
2011 Wins Bronze at the London Olympics Test Event in Weymouth
2012 Suffers illness four months prior to the “Home Games” which disrupts training, but still finishes 7th
2013 Wins Silver at the World Championship in Buzios, Brazil
2014 Gold at Sailing World Cup Grand Final in Abu Dhabi
2015 Gold at the European Championship in Mondello, Sicily
2015 Her place on Team GB for the Rio de Janeiro Olympic Games in 2016 is announced
2015 Wins Silver at the World Championship in Muscat, Oman
2015 Successfully defends her title as Sailing World Cup Grand Final Champion, Abu Dhabi
2016 Signs with MOT Models