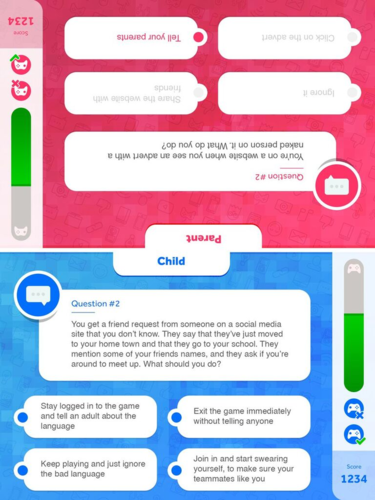 London, 28th January 2016 – Pocket App, the UK’s largest independent app developer, is pleased to announce the launch of CyberSense, a new app developed for Internet Matters, an independent not-for-profit organisation set up by BT, Sky, TalkTalk and Virgin to help parents keep their children safe online. Available immediately on iOS and Android, the app has been created as an innovative new way to educate children about online safety.

Created specifically for tablets, CyberSense is a fun and engaging app that children aged 8-10 can use to learn good online practices and features a slick split-screen quiz that allows parents and children to select one of nine topics they would like to learn more about, such as cyberbullying, advertising and web-chatting.

The app is unique in that it doesn’t simply teach children about online safety, it encourages parents to use the app as a tool to be actively involved with the teaching process. When a quiz category is launched, the tablet screen splits into two, so that parents and children can answer the multiple-choice questions simultaneously. The parent is able to see which answers the child chooses, and so will be able to clearly see which subjects need further explanation.

Paul Swaddle, CEO of Pocket App commented, “As consumer devices, such as tablets and smartphones, become ever more widely available, children are gaining more access to the internet than ever before. It is imperative that parents actively teach their children about online safety from a young age and apps such as CyberSense are a great way to go about this. The questions are tailored to the knowledge of an eight year-old, but the use of a tablet app also encourages children to learn about the internet and mobile technology by experience, all in a safe environment and under the supervision of an adult.”

Since being released to the app market, CyberSense has had a great deal of positive feedback from parents who have found it a useful and highly engaging tool to help teach their children about online safety. The app featured in Virgin Media’s Christmas marketing campaign and has also been praised in an article in national newspaper, The Mirror, by Ulrika Jonsson as a fantastic way for parents to discuss with their children how to use the internet safely.

The release of CyberSense is the latest in the string of recent successes for Pocket App. The company is undergoing a period of ambitious development, having established the London Lab at the end of 2015, its new base of operations in central London, as well as winning awards in the UK App Design Awards and the UK Digital Experience Awards for apps My Poppy and 999eye. Pocket App has also recently formed a significant partnership with Progress Software and CEO Paul Swaddle was even headhunted to appear as a guest judge on the final of BBC One series, The Apprentice. Coupled with the positive reception that CyberSense has recently received, these recent achievements are a great foundation upon which Pocket App will continue to grow strongly in 2016.

To learn more about Pocket App and particularly its exciting crowdfunding initiative as the business expands its products, services and team, visit www.pocketapp.co.uk

Pocket App is the UK’s largest independent app developer designing, developing and distributing award-winning mobile apps. Founded in 2011, Pocket App’s senior executives collectively have over 30 years’ experience in the mobile industry having worked in partnership to deliver projects for large telcos, as well as a vast array of leading brands and marketing agencies. Pocket App is a recognised specialist multi-platform application provider, designing mobile apps and mobile solutions. For further information please visit www.pocketapp.co.uk or follow us on Twitter @PocketApp.