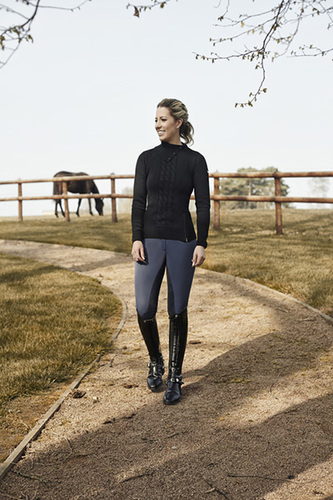 Charlotte Dujardin OBE, who rode to double gold medal victory in the London 2012 Olympic Games has signed with one of Europe’s most successful modelling agencies, London-based MOT Models.

Charlotte’s Olympic success with horse Valegro at the Games was nothing short of exceptional following years of hard work in Gloucestershire at dressage champion Carl Hester’s yard. Spotting her talent after just ten days of Charlotte Dujardin working at the yard in 2007, they formed a solid partnership, with pupil and teacher achieving Olympic gold in the team dressage event in 2012.

Double gold champion, Charlotte, then went on to win the gold medal in the individual dressage event two days later, in a routine which included Land of Hope and Glory, The Great Escape and the chimes of Big Ben.

Since London 2012, the Enfield-born sportswoman has become one of the most successful dressage riders in history. After being made an OBE in 2013, Charlotte’s gold medal winning streak continued with victory at the European Dressage Championship in 2013, World Equestrian Games in 2014 and the Dressage World Cup in 2014 and 2015.

With the excitement for the Olympic Games in Rio this summer already building, Charlotte is looking forward to working with MOT’s Sports Personalities division on some exciting, high-profile campaigns.

Charlotte said, “I’m really excited to have signed with MOT and can’t wait to work on some exciting projects in this Olympic year. MOT Models was an obvious choice for me because of the experience across the team and the positive atmosphere of agency.”

Alison Griffin, a Director of MOT Models, said, “It’s great to have Charlotte Dujardin signed with MOT in the Sports Personalities division. Her fantastic success in London 2012 made her and the dressage team Olympic icons and heroes of the sport.”

“The run up to the 2016 Olympic Games in Rio de Janeiro is already underway and Charlotte will be appearing in a variety of sporting and commercial campaigns.”

The agency, which was founded in 1985, prides itself on its strong, positive, nurturing relationships with both models and advertising clients. They typically serve the commercial market, namely high profile campaigns for brands including Axe (Lynx), Body Shop, Esprit, Galaxy, Samsung, Seksy and Vertu.

1985 Born 13 July in Enfield, London
2001 By age 16 Charlotte had won Horse of the Year Show competition four times and was a winner at Hickstead on three occasions
2007 Begins working for current coach and mentor, Carl Hester at his yard in Gloucestershire
2011 Competes in first dressage Grand Prix event with horse Valegro
2012 Chosen to represent Team GB at the London Olympics with Valegro
2012 The team sets a new Olympic record and wins the gold medal in the team dressage event. Charlotte and Valegro also win the gold medal in the individual dressage event
2013 Made an OBE in New Year’s Honours list
2014 Is Individual World Champion in Grand Prix Freestyle and Special at the Alltech FEI World Equestrian Games
2014 Named BT Action Woman of the Year and The Sunday Times and Sky Sports Sportswoman of the Year
2015 World Cup Champion
2015 Becomes Global Ambassador for the Brooke Animal Hospital
2016 Signs with MOT Models under their Sports Personalities division