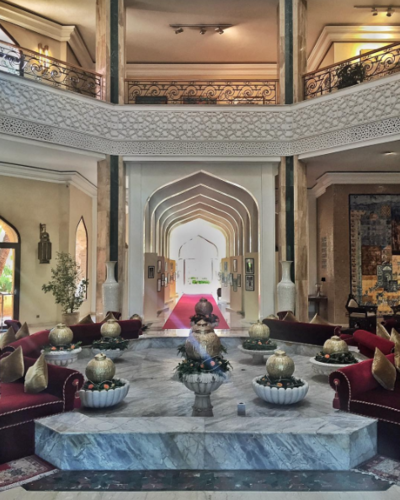 The BBC has gone James Bond with its new six part series, The Night Manager, the latest drama to fuel our obsession with espionage. Starring Tom Hiddleston, Hugh Laurie , Olivia Coleman and Tom Hollander, the series was shot in many glamorous locations including Switzerland and Mallorca but it opens in Cairo during the 2011 Arab Spring, where Hiddleston’s character, Jonathan Pine, formerly a British Army Officer, is now the Night Manager of the swish Nefertiti Hotel, who is recruited by intelligence agents to infiltrate an international arms dealers network.

In reality the hotel scenes were shot at The Es Saadi Palace in the heart of Marrakech’s upscale Hivernage area in the Golden Triangle of this vibrant city. With 20 acres of beautiful gardens facing the Atlas Mountains, 83 suites, 8 ksars and 10 private villas all with stunning interiors and great attention to detail this was the ideal choice of hotel to kick off the action.
It was deliberate to make it very sexy," explains Danish director Susanne Bier. "The story takes place in a very lavish world – the world of arms dealer, Richard Roper (Hugh Laurie) – and part of the excitement is that Jonathan Pine and the audience get sucked into this world because it’s so lavish and glamorous.

The owners of The Es Saadi Palace were delighted to welcome the film cast and crew who all made good use of the Palace’s facilities. The two Toms, Hiddleston and Hollander, had treatments at the Palace’s 3000 square meter spa which is over three floors and home to the only other Dior Institut outside Paris, as well as a traditional Hammam and Oriental Thermae. The large gym is right up to date and Huge Laurie was spotted doing some intensive training in order to get into shape for his role as ‘The worst man in the World’.

Our hero was such a variant on Bond, you half expected him to introduce himself by saying: 'the name's Manager. Night Manager.' Tom Hiddleston ticked a lot of boxes as the eponymous hero, a posher, more conventional Bond. Jonathan Pine was a dashing, idealistic Brit whose reaction to explosions announcing the Arab Spring is a typically British stiff upper lip: ‘Would you like to wait in the bar Madam? Cocktails. Complimentary’ – just the sort of reaction one would expect from the unflappable and delightful staff at The Es Saadi Palace. Join us for the next episodes for the next five weeks on Sundays at 9pm BBC1.