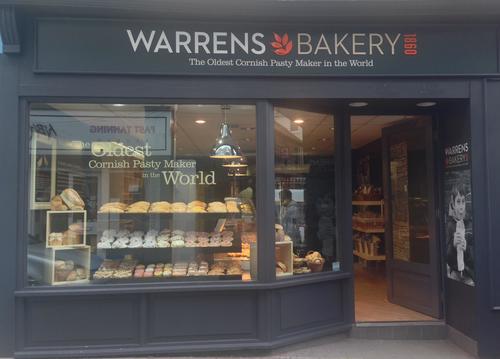 With an average of 45% of the vote against 9 other bakeries, the people of Cornwall are sharing the same view as the judges in the World Pasty Competition and are naming Warrens Bakery’s pasty as the very best.

Pasties have been a hot topic during the lead up to St Piran’s Day, Cornwall’s national day, on Saturday (5th March) and the oldest Cornish pasty producer in the world is celebrating a week of wins. Having been voted the Cornish people’s favourite in a series of polls ran by the local press, Warrens Bakery has gone on to win the highly prestigious ‘Open Savoury’ category in the World Pasty Championships.

The battle of the pasties took place on St Piran’s Day itself at the Eden Project in Cornwall. Warrens Bakery impressed all with its chicken, potato, swede and onion in a creamy white sauce pasty.

The Championships, which are in their fifth year and are supported by the Cornish Pasty Association, saw entries from all over the world, including one family who travelled from Canada. The pasties though had to be cooked in Cornwall. Over 200 pasties were entered, both the more traditional as well as innovative Cornish pasty recipes, and thousands travelled to the home of the famous Biomes to join in the celebrations.

Commenting on the World Pasty Championships, chairman of Warrens Bakery, Mark Sullivan says: “This is a momentous win. To gain the judges’ vote in one of the two main awards’ categories is outstanding. Full credit goes to our head baker, Jason Jobling, and his team for their perpetual commitment to creating innovative, well-crafted products which have a reputation of standing apart from the competition.” This adds to Mark’s previous comment on the results of recent polls which named Warrens Bakery as the ‘people’s choice’, when he said: “We take great pride in the preparation of all of our pasties and the other products in our range. We believe this, combined with our procurement and heritage, is what makes our pasties the best in Cornwall.”

Warrens Bakery came out top on major polls held on Pirate FM and the Cornishman last week, and has been holding the top spot on the Plymouth Herald and Cornish Guardian polls which are due to be announced over the next few days. With an average of 45% of the vote against 9 other bakeries, the people of Cornwall are sharing the same view as the judges in the World Pasty Competition and are naming Warrens Bakery’s pasty as the very best. Several thousand people have been involved in the radio and press polls, which reinforces Warrens Bakery’s reputation for excellence and consistency, year in, year out.

The first big announcement came earlier last week when Warrens Bakery won a staggering 54% of the votes in Pirate FM’s ‘The Cornish Pasty, What's Your Favourite?’ poll. Warrens Bakery was up against six other Cornish bakeries in this independent poll. Following these results, the three named regional papers started their own polls. The second announcement from The Cornishman delivered a 43% win and the other two are looking very promising.

Established in 1860, Warrens Bakery is the oldest bakery in Cornwall and is famed for their award-winning artisan bakery products. All of their Cornish pasties are crafted to a traditional recipe which has been handed down through the generations with only the finest ingredients used. The bakery still hand crimp all of their pasties, with different crimping ‘signatures’ setting each member of the team apart. In addition to their famous Cornish pasties, Warrens Bakery, one of the original artisan bakers in the United Kingdom, specialise in a range of craft bakery products including savouries, scones, artisan breads, cakes, sweet treats and regional speciality biscuits.

Other recent recognition for Warrens Bakery’s hand crafted, sweet and savoury bakes has seen them selected as one of the top three craft bakers in the UK in the prestigious Craft Business Award in the Baking Industry Awards 2015. A national award, The Craft Business category gives the bakery industry the chance to acknowledge craft bakery businesses committed to customer service and product innovation. Such innovation recently saw the bakery pushing the boundaries in craft baking, creating the first ever highly acclaimed ‘Mince Pie and Custard Pasty’.

Pirate FM is Cornwall’s number one commercial radio station. Based in Redruth since their launch in 1992, the radio station is extremely proud to be Cornish. Pirate FM’s LoveCornwall.com Business Directory is designed to shout about the great businesses in Cornwall, the poll for ‘The Cornish Pasty, What's Your Favourite?’ competition ran on LoveCornwall.com. The Plymouth Herald, Cornish Guardian and Cornishman are highly respected regional newspapers.

Visit www.warrensbakery.co.uk for further information. To hear the latest news from Warrens Bakery follow them on Twitter (@WarrensBakery) or link up with them on Facebook www.facebook.com/warrensbakery.

For further information, photography, a sample of this best of class pasty or an interview with Mark Sullivan, please contact: