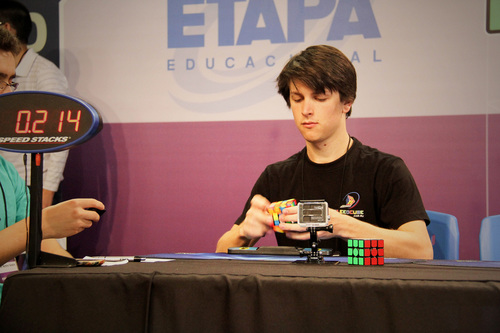 A metaphor for clever, fun and frustrating, the Rubik’s Cube continues to fascinate every new generation

With under a week to go until the European Rubik’s Cube Championship begins on 15 July, the continent’s top ‘speedcubers’ are in the final stages of their preparations. Soon they will congregate in Prague, Czech Republic, to pit their considerable skills against one another.

The 525 competitors – or ‘speedcubers’ – from 43 countries will take part in the seventh European Rubik’s Cube Championship, including 18 representatives of the United Kingdom. The UK has a strong track record in the competition and reigning European champion Alexander Lau, is British.

However, the UK does have the skill to be a real challenger at the 2016 European Championship in reigning British champion Robert Yau and former world champion Breandan Vallance.

Although only a European can win the prize, competitors from across the globe will be competing across 18 categories. Two-time World Champion Feliks Zemdegs of Australia, who is something of a celebrity in the Rubik’s world and broke the world average solve record on 9 July in Warsaw, will be competing.

The classic 3x3 Rubik’s Cube is only one of the competitions that will take place over the weekend. The 18 competitions include:

The highlight of the competition will be the 3x3 cube final at 4.10PM local time (6.10PM GMT) on Sunday 17 July. Each competitor solves the cube five times, the fastest and slowest times are removed and then the average time is taken from the remaining three scores. The top competitors at this year’s European Championship, in order of fastest average solve, are:

Over 400 million Rubik’s Cubes have been sold, making it the world’s bestselling toy. With high-profile celebrities such as Justin Bieber, Will Smith and Logic taking an interest in the Rubik’s Cube, its popularity has seen a dramatic resurgence over the past year.

Chrisi Trussell of Rubik’s Brand Ltd said, “A metaphor for clever, fun and frustrating, the Rubik’s Cube continues to fascinate every new generation - as evidenced by the huge field of 525 entrants to the 2016 European Rubik’s Cube Championship. 40 years on from its invention the Rubik’s Cube is still hugely popular, with sales continuing to soar year on year.

“There are not many things your parents played with that are still cool, but the Rubik’s Cube is one of them!”

Alternatively, join the conversation at #RubiksCube.

Images and B-roll from the 2015 Rubik’s Cube World Championship, plus other archive Rubik’s Cube images, are available on request. We would be delighted to organise interviews.

Journalists are invited to attend the event, bust must register with Famous Publicity prior to the event.

WHAT: European Rubik’s Cube Championship 2016
WHO: 518 competitors, mostly from Europe but also from across the world (full list of competitors: https://euro2016.cubing.net/competitors/byname)
WHEN: July 15-17 2016
WHERE: Sportovni Hala Radotín, U Starého stadiónu 378/16, 153 00 Radotín, Prague