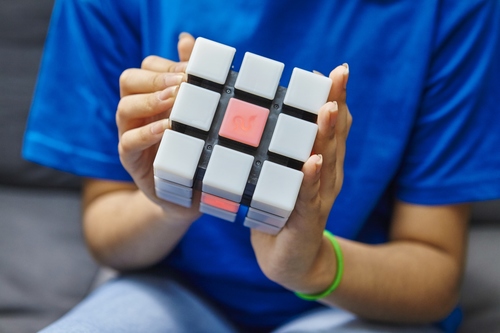 Rubik’s Brand Ltd has launched its latest addition to its product range with the Rubik’s Spark. The world’s most popular toy and design icon from Rubik’s Cube has puzzled children and adults for over 40 years. Hundreds of millions of people across the world became mesmerised with the toy which quickly became the symbol of the generation.

With a modern twist to the iconic Cube, the Rubik’s Spark uses lights, sounds and unique sensor technology and allows to be controlled by tilting, turning and quick movements – nicknamed ‘bubble control’ by its creators. Its intelligent design, much like the original, allows the player think three-dimensionally.

Whilst the original Rubik’s Cube was infamous for its difficulty, the Spark has five different games with 26 levels each, so everyone can be faced with a challenge – from the beginners to the more experienced gamers. The Spark also has a multiplayer mode which has more of a social aspect to the game and is ideally suited to parties, whether they be with family or a group of friends. A new fun function that has been introduced by Rubik’s Spark is the ability for players to create their own music using ‘Rubik’s DJ’ party game.

Chrisi Trussell of Rubik’s Brand Ltd explains, “The Spark is a true descendant of the Rubik’s Cube in that it encourages us to spend time together – it’s fun, social and devilishly hard. Exciting and frustrating in equal measure, it’s a great party game.”

Since the invention of the original Rubik’s Cube in 1974 by Ernő Rubik, the classic Cube has undergone many changes. This modern addition to the Brand is great for both adults and children to enjoy.

The Rubik’s Spark can be found at toy and games stores or direct from www.rubiks.com.

Since its invention in 1974 by Ernő Rubik, the classic Cube has undergone a number of updates and changes.

Ernő Rubik created the first prototype of the cube as a young professor of architecture in Budapest, in order to help explain spatial relationships to his pupils. Originally named the ‘Magic Cube’, it was renamed ‘Rubik’s Cube’ when it was launched internationally in 1980.

After a period of incredible global popularity, the Rubik’s Cube has become the world’s bestselling toy, with over 400 million cubes sold so far. Last year, the Rubik’s Cube experienced a huge rise in popularity in the US and that trend is spreading across the globe.

Justin Bieber, Will Smith and rapper Logic are all celebrity Rubik’s enthusiasts, and the iconic puzzle is also popular with sportspeople such as cyclist Mark Cavendish and footballer David Silva.

Images and interviews are available on request. We have a limited number of Rubik’s Spark cubes for journalists, so please let us know if you’d like one to review.