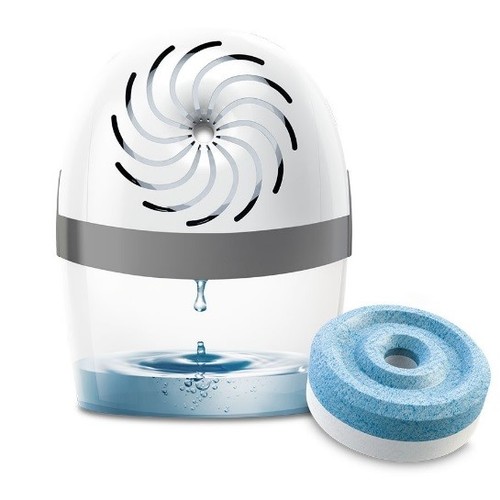 According to a report on indoor air quality issued by the Department of Health in England, people spend 60-90% of their lives indoors

How clean is the air you breathe?

You may be forgiven for thinking of pollution coming from car exhaust fumes, factory pollution and cigarette smoke, but we’re in fact talking about the air inside your home. As we shut our windows in cooler weather and encourage mould to grow in the warmth, we can end up inhaling lots more pollutants than we think.

According to a report on indoor air quality issued by the Department of Health in England, people spend 60-90% of their lives indoors, with 60% of that time being spent at home*. So, if your home’s suffering from mould, your health may well suffer too. The NHS says that if you have damp and mould, you’re more likely to have respiratory infections, allergies or asthma, and it can also affect the immune system**.

Mould is caused by excess moisture, such as from leaks, rising damp or condensation – the latter being so common that one in five UK properties are blighted by it***. But luckily for millions across the nation, leading high street retailer Robert Dyas has an array of solutions to this perennial problem.

“As well as looking unsightly, we know that mould can be terrible for people’s health, especially for babies and the elderly”, says Robert Dyas’ Head of Marketing, Rebecca Waters. “Prevention is of course better than cure, so we have lots of solutions that combat moisture and stop mould growing in the first place. But if it’s already too late for your walls, we can help you remove it easily too.”

The UniBond Aero 360° Moisture Absorber (£9.99) will tackle the root cause of the problem by drawing water from the air and converting it into a solution. Compact in size, it’s ideal for windowsills or tucking out of view in the corner of the room. Alternatively, you could try the more stylish UniBond Humidity Absorber(£10.49).

For small or confined spaces, use the UniBond Mini Moisture Absorber (£3.99). It’ll strip all the excess moisture from your airing cupboards or shoe racks, leaving behind a fresh citrus scent.

The Kontrol Mini Moisture Trap (£2.29) is compact and completely portable – great for use on windowsills and even cars.

Electric dehumidifiers are also a good choice for reducing the amount of moisture in the air. The De’Longhi DEX10 Dehumidifier (£154.99) (online only) removes up to 12 litres of excess moisture a day.

For mould that’s already appeared on your walls, mould remover sprays or gels are essential. HG Mould Spray (£5.99) eliminates even the toughest mould on your tiles, plaster and more.

To relieve or prevent respiratory problems,air purifiers.The De’Longhi AC230 Air Purifier (£209.99) (online only) removes everything from mould spores to pollen, pet allergens and odours from the air for a cleaner, healthier home.

Finally, if you’ve got mould on your shower curtain, tackle it with some Dri-Pak White Vinegar Cleaner (£1.49) and if it leaves a stain, soak it in water with some bleach and give it a quick scrub.

Prices are correct to the time the press release was issued.