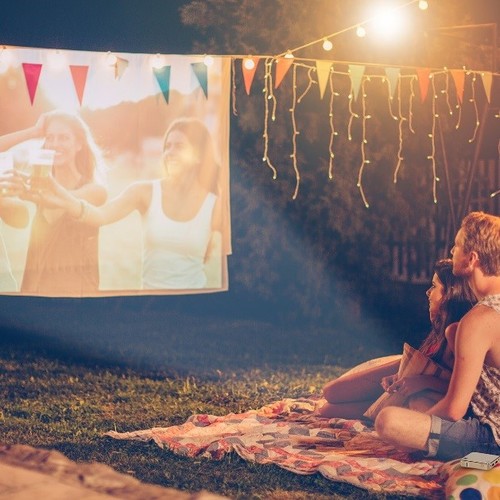 Hosting movie nights at home can be so much cheaper if you love to see films often, and we’ve got everything you need to make that happen

The boom of the surround sound, the vast and vivid picture, the collective thrill... There are heaps of things to love about going to the cinema, but with ticket prices sky-high, it can be a less-than-enjoyable experience for your bank balance. And with a family in tow, it’s an outing that can cost up to £35.60 a time – or £55.60 in IMAX*.

But with so many massive family movies coming out this year, it’ll be hard to resist the pull of these sensational spectacles. There’s Dumbo, The Lion King, Aladdin, Star Wars Episode IX, Frozen 2, Toy Story 4, Avengers: Endgame, and plenty more besides. (**release dates below)

With big films like these generally coming out just three to five months later on home video services – and smaller films in a matter of weeks – it’s well worth saving your money and staying in instead. For a family to rent a film at home, it costs just £3.49 in SD/£4.49 in HD on Microsoft (via Xbox), and £4.49 via Apple TV and Amazon Prime***. With a few cinema-style snacks and a cosy cinematic atmosphere, you can enjoy a whole evening of entertainment for a fraction of the price.

To help you create your exciting home cinema nights, leading high street retailer Robert Dyas has everything you could ask for.

“The experience of going to the cinema is wonderful but the high prices can be very prohibitive, especially if you have a family. Hosting movie nights at home can be so much cheaper if you love to see films often, and we’ve got everything you need to make that happen,” says Andrew Georgiou, Robert Dyas’ Buying Manager. “With a mini projector, snug blankets, a popcorn maker for homemade treats, and other fun items, you can end up having a more entertaining night at home together than you would at the cinema!”

If you want to recreate the big screen, the Kodak Luma 75 Portable Pocket Projector (£179.99, online only) is a must. It may seem expensive at first glance but it’s the equivalent of just five standard family tickets – or three in IMAX – so it’ll certainly pay for itself if you love cinema-going. It produces high quality HD imaging with a 1.5W speaker yet is compact enough to fit in your back pocket, so you can even take it with you to friends’ houses for double the fun. As for the functionality, there are no complicated buttons and menu screens – you simply plug in and play.

Make your evening cosier than a cinema trip with snug blankets (£4.93 - £17.49) and comfy bean bags like this Kaikoo Thick Knit Large Pod Bean Bag (£46.99, online only). You can even play fun games to add some extra excitement! You could print out movie bingo cards and mark off props, shots and characters as you see them which can keep young minds attentive. This would perfect for kids’ sleepovers as well as family film nights – especially if you make the Slush Puppies and popcorn.

With the excitement, the sound, the snacks and everything else recreated, your home movie night could easily be more entertaining than an evening out at the cinema – not to mention the savings you could make if you’re film fans. And with no travelling back home involved, you can all simply roll into bed afterwards.

ENDS
Prices are correct to the time the press release was issued.