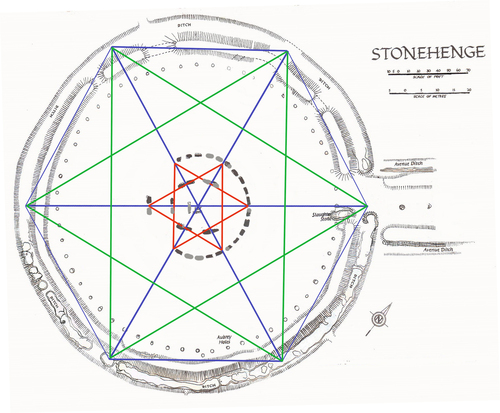 Rottingdean, UK 18th June 2014. The unique bond between Stone-Age man and quantum science has been proven by the recent discovery of how Stonehenge was constructed some six thousand years ago.

Robert John Langdon’s new book ’13 Ancient things that don't make sense in history’ reveals, for the first time, details of how our ancestors built this most famous of prehistoric sites, based around perfect geometrical mathematics. This groundbreaking book also shows that the famous principles taught to most secondary school children, currently accredited to the ancient Greek mathematician Pythagoras, was actually practiced some four thousand years earlier by an ancient society known to archaeologists as the ‘Megalithic People.’

This prehistoric civilisation was responsible for the construction of stone monuments such as Stonehenge where the latter-day Druids will gather on the Morning Summer Solstice on the 21st June this year, to witness the sun rising on the longest day. Little will they know that the stone construction that surrounds them was deliberately built to the exact dimensions of a mathematical shape known as a Hexagram?

This constructional blueprint is well known to quantum scientists and biologists as it is the fundamental building block of nature and unique geometrical entities such as snowflakes and flower petals. From bees' honeycombs, the Giant's Causeway and even the mysterious north pole on the planet Saturn, hexagonal patterns are prevalent in nature due to their efficiency, which like Stonehenge are based on a six sided construction made from perfect isosceles and Pythagorean triangles, commonly known as the golden ratio.

‘13 Ancient things that don’t make sense in history’ is a collection of thirteen essays from Robert John Langdon’s epic non-fiction trilogy 'Prehistoric Britain’ reworked to be of appeal to the general public who are interested in the unexplained mysteries of the past.

The first book ‘The Stonehenge Enigma’ which proves that Stonehenge is five thousand years older than currently believed and is associated with Plato’s Atlantis, is available on Amazon and Kindle ISBN: 978-1-907979-02-6.

A permanent exhibition of Robert John Langdon's work, including the first ever published prehistoric maps of Wiltshire and the South Downs, and models of the original Stonehenge structure are available to view at: Ology, 12-14 High St, Rottingdean, Brighton BN2 7HR - pictures of the exhibition are attainable at: www.abc-publishing-group.co.uk/exhibition