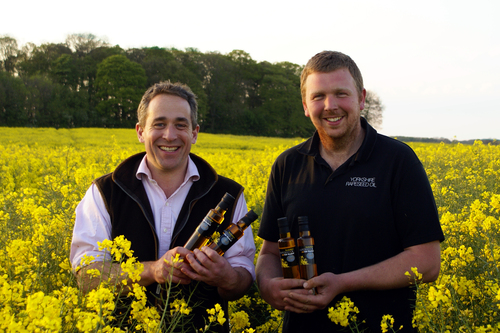 Two entrepreneurial artisan producers have been burning the midnight oil to give one of Britain’s award winning and bestselling culinary oils a be-smoke makeover.

“Smoked food is really popular at the moment – with home smokers and barbecue restaurants popping up all over the place,” says Justin Staal, who makes an eight-strong range of delicately hand-smoked poultry and fish at Staal Smokehouse.

“I wanted to tap into people’s love of smoky food by giving home cooks a cracking culinary oil to work with too, but I wanted to use an oil that was pressed in Yorkshire.”

“Yorkshire Rapeseed Oil is already an award winner and has a natural, nutty flavour that takes other flavours really well and when Adam suggested a collaboration it was a perfect match. Watch this space as we’re already working together on the next range of smoked products!”

The new Yorkshire Smoked Rapeseed Oil will be available from staalsmokehouse.co.uk and yorkshirerapeseedoil.co.uk, independent retailers, farm shops, farmers’ markets and food shows throughout Yorkshire, London and the South East.

• Staal Smokehouse is located at The Cottage, Riston Grange, Long Riston, East Yorkshire, HU11 5SA, tel: 01964 541 946.
• Justin and wife Georgina followed a long-held dream to start their own business when they set up Staal Smokehouse at the family farm in 2011. Justin travelled extensively during his job as a fishing tourism expert before setting up Staal Smokehouse, bringing smoking and curing techniques from various corners of the world, from hot smoked King Salmon in Alaska to cured Ptarmigan in the farming heartland of Iceland.
• In just two and half years Staal has won multiple gold Great Taste Awards, a Remarkable Fayre award for his oak-smoked salmon and ‘Best Fish’ for his Hot Smoked Trout in last year’s Deliciouslyorkshire Awards.
• Justin’s products are also used in the kitchens of some of the best pubs and restaurants in the county; among them the Michelin starred Pipe & Glass Inn, South Dalton, and The Star at Sancton.
• Adam and Jennie at Yorkshire Rapeseed Oil won two coveted gold stars in the Great Taste Awards 2013 and were shortlisted for Best Small Business in the Family Business Place Red Ribbon awards.
• Yorkshire Rapeseed Oil is a cold pressed, extra virgin rapeseed oil that is produced from seed pressed, bottled and labelled on the family farm in the heart of the Yorkshire Wolds. Its distinctive, nutty taste and high burn point (which makes it suitable for everything from baking to frying and roasting to dressing) means it is used in Michelin starred kitchens across Yorkshire.