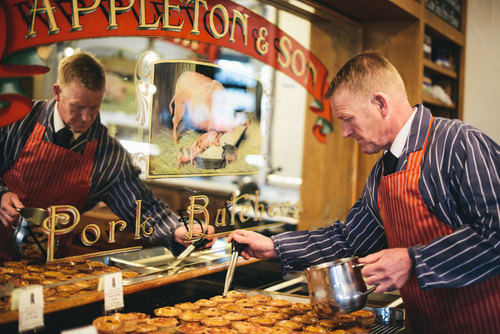 Appleton’s, a heritage pork butchers originally based in Ripon is opening a new shop in Wetherby.

The specialist pork butchers is opening its new branch in the Market Place on June 9 – the first time the 147-year-old business has expanded.

The new branch is testament to Appleton’s continued success, and the secret, it seems, lies inside its piecrust.

Alongside fresh hams, cured meats and sausages, Appleton’s famous pork pies – made to an ancient family recipe which gives them their unique flavour - have locals queuing around Ripon Market Square, and the business sells more than 3,500 per week.

So while the new Wetherby branch will continue to offer more of its most popular pies, it will also provide a new range of charcuterie, pork rillettes and patés, and the landmark Tudor façade of its Ripon shop, set up in 1867, will be replaced at the new shop with a Victorian -style striped awning, floor and wall tiles and brass fittings.

“There’s nowhere else in Wetherby that offers what we do,” says owner Anthony Sterne, who bought the business from a fourth generation family member four years ago. “Since the horsemeat scandal, shoppers have become more discerning and are returning to traditional, independent butchers like ours that are set apart by their properly sourced, hand crafted products and personal counter service. We’re striving to become a big part of the Wetherby community just like we are in Ripon.”

Modelled on the French-style charcutier, Appleton’s specialises in pork products such as cured whole hams, and cooked meats such as roast ham, sausage rolls, Scotch eggs and faggots. Ox tongue, for example, is still pickled, boiled and hand pressed using the methods handed down from generations of Appletons.

“We’re keeping old butchery skills alive,” adds Anthony. “And it’s simply not good enough to sell what the supermarkets do any more. We’d rather be specialists; doing the best at what we do, rather than doing a bit of everything and not doing any of it well.”

Editor’s Notes
• Appleton’s has been in business since 1867, when nineteen year-old Thomas Appleton started working for Smithson’s butchers in Kirkgate, Ripon. When Mr Smithson died five years later, the business was transferred to Thomas and became T Appleton & Son.
• Mr Appleton’s original principle of selecting Yorkshire’s finest meats, and family recipes, served him well and his butcher’s shop thrived. In 1936, Appleton’s moved into the landmark black-and-white building on the market square it still occupies today.
• The new Wetherby branch will be located at 51 Market Place.
• As well as freshly made pies and meats the business also delivers lunch to local businesses and offers a hog roast service for parties, weddings and corporate events.
• Anthony Sterne comes from a farming and butcher’s family and was formerly a development chef at Prêt A Manger before setting up Independent Foods, a gourmet pie company stocked in Harvey Nichols, the Star at Harome, Booths and Waitrose, for which he won a Waitrose small producer award.