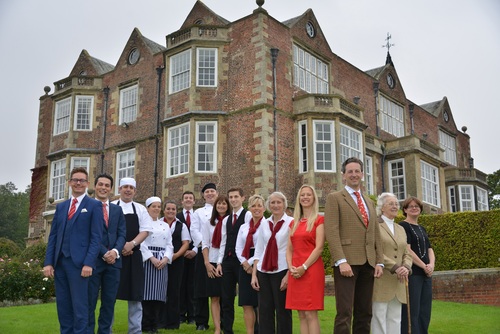 You don’t have to wait too long to get your fix of Downton Abbey – treat yourself to a stay at the majestic Goldsborough Hall and you can live life like the Crawleys.

Experience stately home living like the fictional Earl and Countess, and be your own lord and lady of the manor with a sumptuous stay, dinner or afternoon tea at this stunning, 17th century country house – once the home of royalty.

Like the stars of the hit show, you can mingle over pre-dinner drinks in Goldsborough’s oak-panelled Jacobean library before heading through to the Lascelles dining room, to peruse award-winning head chef Paul Richardson-Mackie’s elegant gourmet menus, created using fruit and veg sourced from the estate’s kitchen garden just as it would have been in Downton’s era. Chef Paul is a born and bred Wakefield lad, with a taste for the freshest and tastiest of Yorkshire produce, prepared in the hall kitchens.

And it’s not every day you get the chance to dine or stay in the former residence of a Royal princess. Instead of Downton’s Lady Mary, Goldsborough Hall’s most famous resident was HRH Princess Mary – the Queen’s aunt – who lived here in the 1920s after her marriage to Viscount Lascelles. Her father George V, her mother Queen Mary, and her brothers the Prince of Wales (later Edward VIII) and the Duke of York (later George VI) all stayed in the rooms at Goldsborough Hall during this time.

Walk in the footsteps of royalty along the Lime Tree Walk, in Goldsborough’s gardens (it was listed by The Times as one of the ‘top 20 places to stay with great gardens’), planted by visiting members of the Royal family, or take afternoon tea under the Japanese cherry trees – a wedding gift to the Princess from the Emperor of Japan.

“You can take a trip back in time to the luxurious surroundings of the Downton era at Goldsborough Hall,” says Mark Oglesby, who owns the Hall along with wife Clare. “And like the Crawleys, live in the lap of luxury while our team wait on you hand and foot. But unlike Downton, you are able to enjoy a few of those little modern luxuries too such as whirlpool baths, plasma screens and, of course, a full Yorkshire breakfast!”

• Goldsborough Hall is situated in the village of Goldsborough, just south of the A59 near Knaresborough about five miles from Harrogate and has excellent connections to the A1M, Leeds, York and Leeds/Bradford airport.

• Built by Sir Richard Hutton, a prominent London lawyer, in the 17th century, and home to HRH Princess Mary, Goldsborough Hall was saved from developers by Clare and Mark Oglesby (the youngest son of the famous salmon angler Arthur Oglesby) in 2005. They have spent the last nine years renovating the building and restoring the grounds.

• With the highest AA rating in Yorkshire, and a kitchen run by esteemed chef Paul Richardson-Mackie, (ex head chef of Rudding Park) Goldsborough is one of the county’s most exclusive restaurants and offers some of the best accommodation in North Yorkshire.