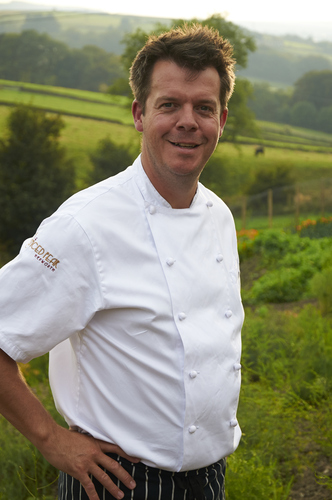 The Spiced Pear Hepworth is seeing double, having won both ‘Newcomer of the Year’ and ‘Chef of the Year’ at the Yorkshire Life Food and Drink Awards yesterday.

The multi-award winning, family run restaurant and tearoom – run by chef Tim Bilton and wife Adele – swept the board, with the judges describing Tim as a chef “who has been both courageous in business and in his personal life”.

“Tim has shown unstinting determination in the face of adversity and, in just over a year, created one of Yorkshire’s top ‘destination’ restaurants,” commented the judges. “While a devastating eye cancer diagnosis might have made most people take a step back, Tim instead used it to help inform other men about cancer…and despite the challenges of hospital appointments and operations, set about launching and running a new restaurant. His commitment to Yorkshire food and hospitality has been unwavering.”

Accepting the award, the overwhelmed chef said: ‘I’m so proud of everything my team and I have achieved in the past year, and to be recognised by Yorkshire Life for our hard work is an amazing end to our first year at The Spiced Pear.’

The stunning restaurant and tearoom, which opened in May 2013, offers locally sourced food, teatime treats on vintage crockery and a chic cocktail bar with grand piano. Since opening, it has been crowned ‘Readers Restaurant of the year for the North East’ by Waitrose Good Food Guide 2015, ‘Best Afternoon Tea’ in the Deliciouslyorkshire awards 2013/14, and Tim has been listed in the Northern Restaurant and Bar Awards Top 50.

Editor’s Notes
• It was as a young pot washer that the cheffing seed was sown for chef Tim Bilton, and unfazed by the 18-hour-days training under mentor Raymond Blanc, a stint in the bustling kitchens of Europe and lecturing to Leeds College students, he quickly climbed the ranks becoming head chef at Bibis restaurant and eventually running the phenomenally successful Butchers Arms pub, Hepworth – where he won ‘Pub Restaurant Chef Award’ from the Craft Guild of Chefs and Yorkshire Life’s ‘Dining Pub of the Year’
• He has been a ‘Deliciouslyorkshire Champion’ and has twice appeared on the BBC’s Great British Menu.
• The Spiced Pear is based at Sheffield Road, New Mill, Holmfirth, HD9 7TP, tel: 01484 683775, email: info@thespicedpearhepworth.co.uk, thespicedpearhepworth.co.uk