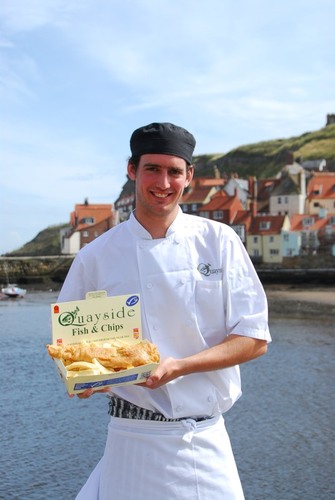 Quayside of Whitby is flying its award-winning fish and chips from the North East to the Far East this month when it serves up Britain’s best to customers at the Japanese equivalent of Harrods.

The award-winning restaurant and takeaway, named ‘Independent Takeaway Fish & Chip Shop of the Year’, has been invited to take part in a festival of British food at two high-end department stores in Japan, so hungry shoppers can get a side order of chips at the checkout.

Top fryer Raymond Fusco, the youngest son in the Fusco family, will be taking the 5,700 mile-trip on September 29 to the ‘British Fair’ at the upmarket Hankyu Hanshin Department Stores, so Japanese customers can learn more about how the iconic British dish is made.

“It’s a once-in-a-lifetime trip and a dream opportunity to show just how wonderful fish and chips can be if they’re done properly,” says Raymond. “We only use sustainable fish and local potatoes for our award-winning fish and chips and, of course, that secret family recipe batter, which we’re going to keep under our hats! It’s fantastic to be spreading the word about the high standard of British food and cooking.”

The special visit, organised following Quayside’s 2013/14 National Fish and Chip Award, will see Raymond serving first-class fry to shoppers at Japan’s Hakata Hankyu at Fukuoka and the Hankyu Umeda at Osaka, which are the biggest department stores in Western Japan, akin to Britain’s Harrods or Claridges. The 10-floor Hakata Hankyu at Fukuoka and the 80,000sq metre Hankyu Umeda at Osaka, draws upwards of 50 million shoppers from various parts of western Japan each year.

• Fusco's of Whitby owns three Whitby fish and chip shops – The Quayside in Pier Road, The Royal Fisheries in Baxtergate, and the Fish Box, in Langbourne Road. The family has run the shops for the last 50 years.
• Over the last decade, it has picked up a raft of awards that include: ‘Independent Takeaway Fish & Chip Shop of the Year’ and ‘Marketing Innovation Award’ in National Fish and Chip Awards (NFCA) 2013/14; ‘Regional Champion North East – Independent Takeaway’ in NFCA 2012; ‘Top Fish & Chip Shop in Yorkshire’ in NFCA 2008; ‘Les Routiers Café of the Year’ 2005
• Raymond won ‘Young Fish Frier of the Year’ in 2009 at the Seafish awards.