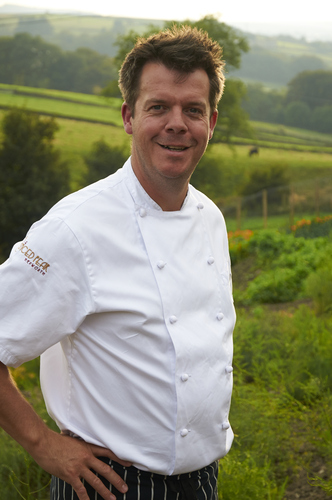 No-one would argue with a New Year resolve to hit the treadmill, trim those inches and detox, but among those who are getting fit could be some who are still ignoring a potentially lethal health problem.

Multi-award-winning chef Tim Bilton’s job keeps him running about and reasonably fit, but he says there was no excuse for letting the juggling of work and family life distract him from a niggling worry. The consequences of ignoring cancer could have been fatal.

Yes, he had a lot on his plate - working to the highest standards and hoping his new restaurant The Spiced Pear Hepworth, near Huddersfield, would attract both a loyal clientele and further awards.

Tim, 42, and married with two young sons, was working flat out when back pain that was affecting the job eventually took him to the doctor.

“While I was there I mentioned that I’d had a shadowy spot on my left eyeball for around a year and it was becoming itchy,” says Tim.

The GP was alarmed and sent Tim to an eye specialist at the local hospital in Huddersfield. He was swiftly referred to oncologists in Sheffield, where surgery removed a rare form of malignant melanoma that could have left him with little or no sight in that eye, the removal of the entire eyeball - or worse.

The procedure involved taking away 40 per cent of the white of his eye and 30 stitches, and was followed up by chemotherapy and radiotherapy. Luckily his tumour was successfully treated before it could spread to his lymph nodes.

Now Tim is determined to warn other men to be vigilant and act quickly if they have a spot, lump or other odd symptom. “I was quite good at feeling for lumps in other places, but had seen this problem in the mirror every day and done nothing, “says Tim. “I was stupid, really.”

“Men tend to be pretty useless about looking after themselves in this way, and put off taking action on things that worry them. I now tell every guy I know ‘You owe it to yourself and your family to see the doctor as soon as possible. The alternative doesn’t bear thinking about…”’

• It was as a young pot washer that the cheffing seed was sown for chef Tim Bilton, and unfazed by the 18-hour-days training under mentor Raymond Blanc, a stint in the bustling kitchens of Europe and lecturing to Leeds College students, he quickly climbed the ranks, becoming head chef at Bibi’s restaurant and eventually running the phenomenally successful Butcher’s Arms pub, Hepworth – where he won the ‘Pub Restaurant Chef Award’ from the Craft Guild of Chefs and Yorkshire Life’s ‘Dining Pub of the Year’
• This year The Spiced Pear won Waitrose Good Food Guide Restaurant of the Year (North) and Highly Commended in the Best Restaurant category at the White Rose Awards 2014. Tim has twice appeared on the BBC’s Great British Menu. He has also published the cookbook Bilton’s Basics.
• Taking a leaf out of his idol Raymond Blanc’s book, Tim’s guiding ethos is beautifully cooked, locally sourced fresh food - his own kitchen garden providing almost half of the fruit and veg used in the restaurant, and a collaboration with a local farm supplying top quality lamb, beef and ethically-produced veal
• The Spiced Pear restaurant and tearoom is at Sheffield Road, New Mill, Holmfirth, HD9 7TP, tel: 01484 683775, email: info@thespicedpearhepworth.co.uk, thespicedpearhepworth.co.uk