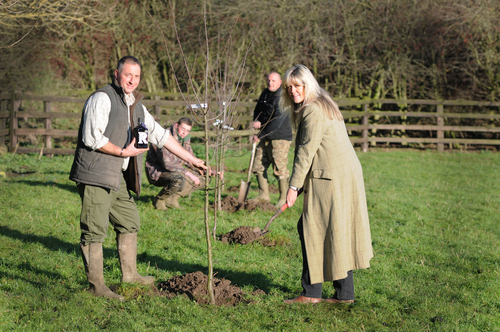 Artisan liqueur maker Raisthorpe Manor is launching a campaign to revive Britain’s shrinking damson crop, urging people to plant more of the forgotten fruit in an effort to save the “damsons in distress.”

The Yorkshire Wolds business – home to the UK’s first Damson Port – launched the ‘Damsons are Forever’ project this week, planting a new orchard of Merriweather damson trees on the Raisthorpe Estate to kick-start the campaign.

While anecdotal evidence shows damsons were used in the dye and cloth manufacturing industries in the 18th and 19th centuries and damson orchards were widespread until the Second World War (used in commercially-made damson jam), after this date changing tastes and the relatively high cost of British-grown fruit caused a catastrophic decline. Only a tiny handful of new plantings have taken place since the 1960s.

Owner Julia Medforth and the Raisthorpe team use the fruit from the hedgerows on the estate in order to capture an essence of Yorkshire in bottle for its range of fruit liqueurs, including its award-winning Damson Port, and are concerned that without new trees being planted, this valuable crop may be lost forever.

“With each tree having an average lifespan of 50 years, once they die out we could be left with no British-grown damsons at all, and so they really are damsons in distress!” says Julia Medforth. “We collect damsons by hand annually, from a nearby orchards and gardens in the area, for our Damson Port, and we want to see this rare countryside gem continue to flourish. To ensure ‘Damsons are Forever’, we’re planting our own so this neglected fruit is given a chance to survive.”

Raisthorpe Manor will continue to campaign to see damsons reinstated as a national fruit in 2015. The 8ft trees have been planted in National Tree Week, (1-6th December) the perfect time to launch the campaign.

• The damson or damson plum comes from word ‘damascene’, with remnants found during archaeological digs of ancient Roman camps across England.
• The small fruits have a vibrant dark blue skin and strong, sour flavour, similar to plums, with tart skins. The tree blossoms with small, white flowers in early April, and the fruit is harvested from late August to September or October.
• A member of the rose family, varieties include Farleigh Damson named after the village of East Farleigh in Kent; Shropshire Damson; The Shropshire; Long Damson; Westmoreland Damson; Cheshire Damson; Merryweather; The Blue Violet; The Common Damson; and White damsons – which are very rare.
• It is thought thousands of early RAF and army uniforms were dyed blue and khaki using damsons. Documents suggest large quantities of damsons were transported from damson-growing areas to mills in towns in the North and Midlands. Market Drayton was famed for its Damson Fair when the textile makers from the north would buy damsons to make dye for their cloth.
• The fruits were also traded each year on ‘Damson Saturday’ in Kendal Market, with much of the demand coming from jam factories in Lancashire and Yorkshire. Many of the villages in Ryedale, North Yorkshire, still have damson orchards.


Editor’s Notes
• Raisthorpe Manor Fine Foods is run by husband and wife Julia and David Medforth at Raisthorpe Manor, Wharram, Malton, North Yorkshire, YO17 9TF, tel: 01377 288295, email enquiries@raisthorpemanor.com.
• Julia’s daily forage for fruit in the hedgerows on the Raisthorpe estate – and an ancient recipe from her grandmother – led her to hit upon the idea of making luscious fruit liqueurs. For the full range, go to
• Raisthorpe’s Damson Port was one of 125 British products out of nearly 10,000, that picked up a trio of Gold awards at the prestigious 2014 Great Taste Awards this year.