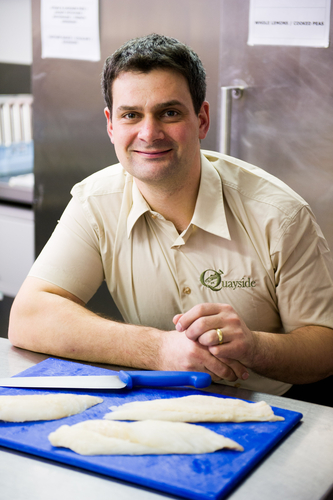 People who suffer from food allergies are ensured a free-from festive season at Quayside, Whitby as the award-winning fish and chip shop leads the way in displaying its allergen information.

Already an industry leader, Britain’s best takeaway is also the front-runner when it comes to complying with the new EU rules on displaying allergen information – which come into force on December 13 – and operations director Adrian Fusco says “it’s all part of a good customer service”.

The Whitby family business – already well known for its extensive gluten-free menu and cross-contamination policies – has spent many months preparing for the new legislation. It has contacted all of its food suppliers for a closer inspection of ingredients and has put together a matrix spread sheet for customers, using red, amber and green indicators, to help them navigate the menus. This week, staff will undergo intensive training sessions so they are up-to-speed on exactly what allergens are contained in each Quayside dish.

But Adrian Fusco says the changes are part and parcel of running a good retail or hospitality business. “A lot of businesses have complained that the new EU regulations are a lot of extra work and too complex, but good businesses should already be doing it,” he says. “While we agree with many independents that an entire menu littered with allergen information is unworkable, it’s not difficult to put all this information into a spreadsheet for customers to look at and for staff to learn. In my mind, it’s all part of good customer service.”

“It also makes good business sense,” add Adrian. “Ultimately, people with allergies can be a ‘table decider’ and if they are part of a large party of people, none of them will want to dine with you if they feel one of them cannot eat safely.”

The new legislation (the EU Food Information for Consumers Regulation 1169/2011) will require food businesses to identify and list 14 potential allergens, such as gluten, soya, milk, mustard, sesame, lupin and sulphur dioxide, in all food sold unpackaged in catering outlets, deli counters, bakeries and sandwich bars. The rules will protect an estimated 21 million Britons who have food allergies and will be policed by trading standards officers, who can bring prosecutions and fines.

Editor’s Notes
• Fusco's of Whitby owns three Whitby fish and chip shops –Quayside in Pier Road, Royal Fisheries in Baxtergate, and Fish Box, in Langbourne Road.
• Over the last decade, it has picked up a raft of awards that include: ‘Independent Takeaway Fish & Chip Shop of the Year’ and ‘Marketing Innovation Award’ in National Fish and Chip Awards (NFCA) 2013/14; ‘Regional Champion North East – Independent Takeaway’ in NFCA 2012; ‘Top Fish & Chip Shop in Yorkshire’ in NFCA 2008 and Les Routiers ‘Café of the Year’ 2005.