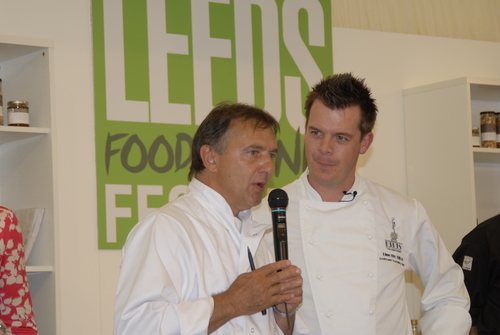 Michel Roux, Marco Pierre White and Raymond Blanc were god-like in the industry, and I aspired to be like them.

If you're looking for a culinary inspiration and living example of the art of using outstanding homegrown ingredients to transform into memorable and magical dishes, they don't come much better than Raymond Blanc.

Long before he earned a place on the staff of Blanc's restaurant Le Manoir Aux Quat' Saisons, the Frenchman was Tim Bilton's role model.

Now an accomplished and multi-award-winner in his own right, Bilton's restaurant The Spiced Pear Hepworth in West Yorkshire owes a great deal to the training and mentoring its owner received in Blanc's Oxfordshire kitchen.

"I'd worked in kitchens since I was 13 and fell in love with the people, the atmosphere and the possibilities of food," says Tim. "Michel Roux, Marco Pierre White and Raymond Blanc were god-like in the industry, and I aspired to be like them." Adoptive Englishman Blanc was a particular idol.

Having gained catering qualifications and worked in restaurants in Yorkshire, the day came when 18-year-old Tim Bilton faced a trial in Blanc's famous kitchen. "I had to cook a perfect portion of vegetables, and it was a terrifying experience." Nonetheless, he impressed the boss and got the job.

"The most important of the many lessons I learned there was the use of the best, freshest ingredients possible, treated with respect and not fussed with too much. Braised brisket should be just that - lovingly, beautifully cooked and not turned into something else."

Having gained further experience in kitchens in France, Tim Bilton returned to Yorkshire and quickly won accolades for his culinary prowess during five years running The Butcher's Arms near Huddersfield.

But the gastro-pub reached full capacity and he yearned to own a place with a smallholding, realising his desire to follow Blanc's example by cooking fruit, vegetables and herbs picked daily from his own garden.

He bought, refurbished and launched The Spiced Pear Hepworth while undergoing successful treatment for a rare eye cancer in 2013. “My positive attitude helped me to fight it, I think,” says Tim. “I don’t do failure, and just got on with my life, taking only six days off.”

Having won further awards for his kitchen, and with fans of his cooking travelling to Hepworth from all over the north, Tim and his full-time gardener Adam Moorhouse now provide 40 per cent of the produce used straight from the four acres of land adjacent to the restaurant. They hope to increase the yield to 75 per cent in the next year.

A recent and highly successful collaboration with the family-run Cannon Hall Farm five miles away brings in locally reared and finished lamb, beef and ethically produced veal that's proving a winner on menus at The Spiced Pear Hepworth. Any other bought-in ingredients are almost all sourced from within a 50-mile radius.

“Our kitchen garden is all down to Raymond Blanc, even down to its irrigation system and French drains. Like him, I work with a fantastic team to use the best ingredients well and give the kind of attention to detail that we hope will bring the first ever Michelin Star to Huddersfield.” says Tim.

“If Raymond were ever to come to my restaurant I’d be a gibbering wreck - but also incredibly proud, because he’s an important part of the story.”

• It was as a teenage pot washer that the cheffing seed was sown for Tim Bilton, and unfazed by the 18-hour-days training under mentor Raymond Blanc, a stint in the bustling kitchens of Europe and lecturing to Leeds college students, he quickly climbed the ranks, becoming head chef in the city’s Bibi’s restaurant and eventually running the phenomenally successful Butcher’s Arms pub, Hepworth – where he won the Pub Restaurant Chef Award from the Craft Guild of Chefs and Yorkshire Life’s Dining Pub of the Year accolade
• He has been a Deliciously Yorkshire Champion and has twice appeared on the BBC’s Great British Menu, as well as publishing a cookbook - Bilton’s Basics.
• The Spiced Pear, a stunning restaurant and tearoom, is at Sheffield Road, New Mill, Holmfirth, HD9 7TP, tel: 01484 683775, email: info@thespicedpearhepworth.co.uk, thespicedpearhepworth.co.uk