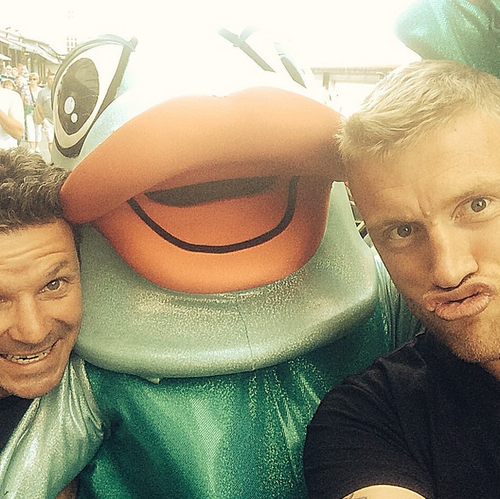 When he got out of his van on the first day, he was mobbed by fans and there was an amazing atmosphere.

Staff at Whitby’s multi-award winning Quayside chip shop swapped fast food for fast bowling when top international cricketer Andrew ‘Freddie’ Flintoff MBE popped in for a portion of its finest fish and chips – and his own Test Match Special on the beach!

The fast bowler and batsman challenged Quayside’s Adrian and Stuart Fusco, and his son Alexander, age six, to mini-Ashes on Whitby beach, while the Fuscos gave their own spin on Britain’s No 1 fish and chips, teaching him to fillet fish and passing on their tricks of the trade. He also joined the Quayside team in the Whitby Regatta raft race, dodging missiles of flour and soot as they sailed around the quay!

Former England Test international Flintoff visited the family-run fish and chip shop and restaurant during August as part of his Sky TV series Flintoff: Lord of the Fries, which sees the former England cricket captain fulfil a lifelong dream of running a chippie. In the series, he teams up with extreme-cyclist Rob Penn to tour Britain and Ireland in Fred's very own cooking-fat-fuelled mobile chippy.

“It was a surreal experience having such a famous sportsman drop by,” says Stuart Fusco. “When he got out of his van on the first day, he was mobbed by fans and there was an amazing atmosphere." The film crew were here for two days and during that time we taught him some tricks, and he cooked up a portion of his own fish and chips from his van – I have to say they’re weren’t half bad!

“On the last day we made sure he was stocked up with enough potatoes and fish to keep him and Rob going on their journey onwards. It was a good innings all round!”

‘Flintoff: Lord of the Fries’ starts on Sky1 Friday (February 13).

• Fusco's of Whitby runs three Whitby fish and chip shops –Quayside in Pier Road, Royal Fisheries in Baxtergate, and the Fish Box, in Langbourne Road. The business is run by Carol Fusco and her sons Stuart, Raymond, Adrian and daughter Maria.