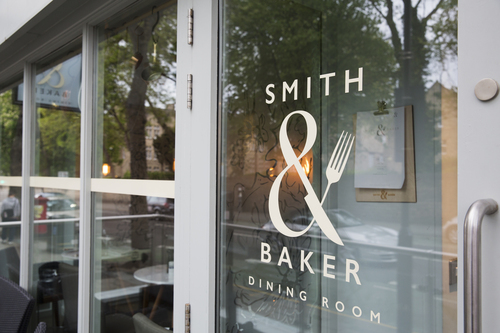 Just because we’re miles from the sea here, doesn’t mean we don’t take our fish and seafood seriously!

The Smith & Baker Dining Room is one of only 10 restaurants in the UK to be in the running to net a national seafood award.

The restaurant on the city’s trendy Ecclesall Road – run by two of the city’s most successful cheffing partnerships, Richard Smith and Jack Baker – has been shortlisted for the Seafish Awards ‘Restaurant of the Year’ 2015.

The awards, organised by trade magazine The Caterer and Seafish UK, celebrates restaurants that demonstrate excellent fish and shellfish cooking and serving skills, as well a good knowledge among front and back of house staff.

“We’re really chuffed to be up for this award,” says chef Jack Baker, who has a life-long passion for fish and shellfish. “Just because we’re miles from the sea here, doesn’t mean we don’t take our fish and seafood seriously!

“From the age of 11, I was out on fishing boats bringing in the catch for the kitchen, and whether it was for a barbecue outside my parent’s beach hut or for a professional kitchen, I’ve always endeavoured to bring out the best in seafood and make it sing. For me, it’s the ultimate ingredient, and Richard and I work hard to ensure everyone who works with us shares that same passion for sustainable, skillfully prepared and great tasting fish.”

Smith & Baker will now be visited by a mystery shopper (a Seafish-appointed auditor) before the final five nominees attend an awards ceremony in London on June 24.

Working together for more than a decade – with some 40 years combined experience in the world’s best dining rooms – chefs Smith and Baker share a love of good food, done simply. Honest cooking using seasonal ingredients from great local suppliers is at the heart of the daily-changing menu at their eponymous restaurant, which has won rave reviews since opening last year.

Seafish UK is a non-departmental public body (NDPB) set up to improve efficiency and raise standards across the seafood industry.

• Smith & Baker is part of the BrewKitchen group, founded in 2007 and a collaboration between Bakewell’s award winning Thornbridge brewery, chef Richard Smith and front of house expert and wife Victoria Smith, which brings good food and good beer under one roof.

• Smith’s Crosspool bistro Artisan was the first BrewKitchen establishment, having started life as Smith’s in 1995, and since then the portfolio has grown to include restaurant Relish and dining pub The Graze Inn, both on Ecclesall Road; The Cricket Inn, Totley; The Inn at Troway; hotel The Beauchief on Abbeydale Road; and The Rose Garden Cafe in Graves Park.

• Originally from the East End, Jack Baker has cooked up fine dining meals for everyone from the US Congress to the Queen’s corgis over his varied career, but he’s happiest when he’s at the family beach hut fishing for his supper. He has been head chef at three of the BrewKitchen establishments, working alongside Richard Smith. This is his first restaurant.