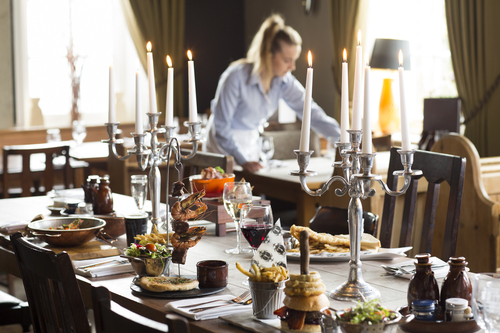 You won’t have to pack a suitcase to get a taste of Mediterranean sunshine this summer – a flavour of Portugal and smoking 30c temperatures can be found right here at The Cricket Inn, Penny Lane, Totley in Sheffield!

Madeiran Marco Caires, head chef at this stunning destination pub, is bringing a flavour of his Portuguese archipelago to pub regulars – including his mum’s own dessert Madeira-style egg custard tart.

Marco, who famously cooked for Sir Alex Ferguson, juxtaposes pub-menu classics with dishes passed down generations of his family, while the Inn’s in-house smoker – which serves whole smoked fish and meats – keeps the temperatures reminiscent of home.

So while there’s all the usual pub favourites – fish and chips and ale pot pie, served with award-winning Thornbridge Brewery beers – there’s also Cozido Portuguese, which is a ragout of ham hock, chorizo and belly pork, Cataplana which is an Algarve-style fish broth, and Espetada, surf and turf skewers, to bring the flavour of the beachside barbecue to even the dullest South Yorkshire day.

Self-taught Caires, who worked at Beeston Castle, Rookery Hall and Alderley Edge Hotel in Cheshire before joining The Cricket Inn in 2010, says he’s never happier than when he’s serving a chaser of Madeira with a pint!

“It’s wonderful to be given the opportunity to showcase some of the dishes from my childhood and my home. My mum was a great cook – and shared many of her recipes with me – and I still ring her every time I change a dish, just to check she approves!”

The Cricket Inn is part of Sheffield’s BrewKitchen group, which has taken the city’s dining scene by storm over the last decade – helping it turn from city of steel to city of food with a raft of informal and independent destination pubs and restaurants. Good, simple cookery and great beers are central to its philosophy.

• The Cricket Inn is based in Penny Lane, Totley, Sheffield, S17 3AZ , Tel: 0114 236 5256.
• Marco Caires has been head chef at The Cricket Inn for five years. Marco regularly cooked for Fergie (Sir Alex Ferguson) when he popped into the restaurant that he was working at, and they’d often watch the Champions League matches on the kitchen TV while sitting on crates of beer.
• The Cricket Inn is famous for its good food and good beer. This year, Marco and his team introduced ‘Feasting Menus’ for groups of eight or more, which include shoulder and leg of lamb with Moroccan spices, spit roast suckling pig, or hot and cold fruit de mer brought to the table to share.
• The Guardian’s Matthew Fort described the pub as having “civilised and kindly service; top-class beers properly treasured; and a really intelligent menu stuffed with properly prepared food”.
• BrewKitchen is a collaboration between Thornbridge Brewery and the city’s top chefs Richard Smith and Jack Baker, and front of house expert Victoria Smith, and encompasses The Cricket Inn, The Beauchief Hotel on Abbeydale Road, The Inn at Troway, Rose Garden Café, Graves Park, and, on the trendy Ecclesall Road, Smith & Baker Dining Room and Graze Inn.
• For more on BrewKitchen, log on to www.relaxeatanddrink.com