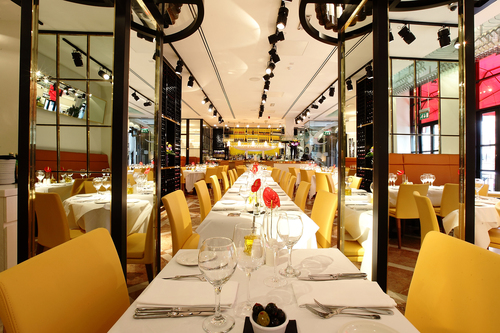 In the San Carlo kitchens we use the freshest ingredients and produce of the highest quality. I am proud of each creation

San Carlo Italian restaurant in Leeds has launched a new menu for summer using the finest produce flown in from the markets of Milan.

The 140-seat restaurant on South Parade has also introduced a selection of grilled dishes. Cooked using charcoal and wood, the meat options on the menu now include a Chateaubriand Steak (28-day aged), served with a béarnaise sauce and 35-day dry-aged ribeye, sirloin and T-bone steaks.

A feature dish on the ‘Florentine Grill’ is the Tomahawk Steak (for two), a large bone-in steak with a big, rich flavour – one of the most rare and expensive steaks from the USA.

Filippo Pagani said: “Every chef enjoys developing new dishes to mark a new season. In the San Carlo kitchens we use the freshest ingredients and produce of the highest quality. I am proud of each creation."

• San Carlo Leeds is located at 6-7 South Parade, Leeds, LS1 5QX, tel: 0113 246 1500, email: leeds@sancarlo.co.uk.
• San Carlo opened its first restaurant in Birmingham in 1992.
• Run by septuagenarian Italian restaurant supremo Carlo Distefano and his family, it has garnered 22 prestigious food and drink awards over the last two decades.
• From his early childhood spent selecting fresh fish with his grandmother from the Ragusa markets in Sicily, to his first forays into the industry sweeping cafe floors and delivering espressos, Distefano turned just £12, tucked into his jacket pocket as he arrived in Leeds in the 1960s – and a stint as a barber at a Leeds’ hairdresser – into a multi-million pound restaurant business, employing more than 900 staff and running 18 venues across the UK (including two in Leeds) and the world.
• The Group now operates nationwide with San Carlos in Manchester, Bristol, Birmingham, Liverpool and Leicester; Cicchetti, Manchester, Covent Garden and Piccadilly, London; Fumo, Birmingham and Manchester; Bottega and Farmacia, Manchester; Fiorentina, Hale and Signor Sassi, London. The Group also has an international portfolio in Bangkok, Kuwait and Qatar.