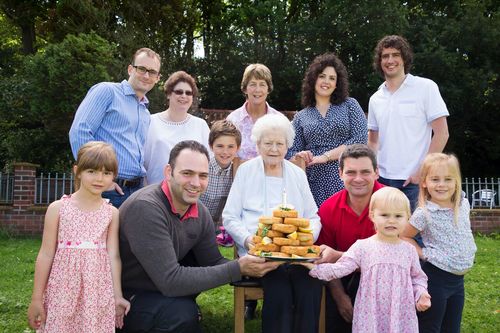 When chip shop veteran Violet Fusco celebrated her 90th birthday this month, she didn’t get the usual sponge cake and icing – instead, she blew out the candles on a Fusco fishcake!

As well celebrating nine fabulous decades, the Yorkshire ‘Fishcake Queen’ also marked more than 50 years in the fish and chip industry, which has seen her hand-make some 1.5 million of the famous Fusco fishcakes.

Two generations later, the Royal Fisheries takeaway in Baxtergate, Whitby, remains in the same Yorkshire family, and the fishcake recipe – with its strictly secret ingredients – hasn’t changed either.

Rather than the familiar Yorkshire fishcake seen in chip shops across the region (which sees fish sandwiched between two layers of par-boiled potatoes), the recipe for the Fusco fishcake was passed to Violet’s teenage son Peter by the owner of a fish stall on Scarborough quay back in 1960.

Handmade by Violet right up until she was 80 (only stopping due to arthritis), today creamy mash is still combined with succulent flakes of sustainable cod – and, of course, that top-secret seasoning – before being coated in breadcrumbs.

Commenting on the celebrations, which took place alongside three generations of her family, Violet said: “It’s wonderful that my grandchildren – and the fishcakes – are still a big part of the business! Our Royal Fisheries fishcakes remain one of the most popular foods at the takeaway and loyal customers have been known to travel from London to get a taste of them!”

• Royal Fisheries is based at 48 Baxtergate, Whitby, YO21 1BL. Tel: 01947 604 738, www.whitbyfishandchips.com
• It is part of the award-winning Fusco family of chip shops, which includes The Fish Box on Langborne Road and Quayside in Pier Road, voted Britain’s best in 2014.
• The Fusco family has been in the fish and chip shop trade for 60 years, starting in 1955, when Violet Fusco worked for John Cross Fish and Chips in Pickering, eventually buying the shop with husband Dennis. Violet and her husband moved to Whitby in the 1960s, buying the Royal Fisheries in 1968. Today, daughter-in-law Carol and grandchildren, Stuart, Adrian, Raymond and Maria continue to run the business.