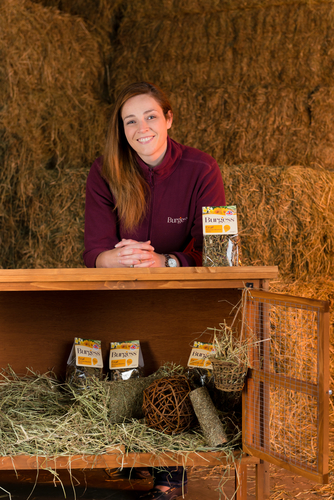 We often think about cats and dogs at this time of year, but can overlook pets such as rabbits

While we might like the snap, crackle and pop of Firework Night, it can prove the last straw for small hutch animals, especially rabbits, the UK’s 3rd most popular pet after dogs and cats.

Yorkshire-based family firm Burgess Pet Care, has revealed that extra hay, straw and a few other ‘home improvements’ around November 5th can make all the difference to animals housed outdoors.

“We often think about cats and dogs at this time of year, but can overlook pets such as rabbits,” says Burgess Pet Care veterinary innovations manager Dr Suzanne Moyes. “But with their superior sense of hearing, fireworks can be doubly terrifying for small animals and because celebrations are rarely limited to Bonfire Night, repeated exposure over several weeks can lead to long-term behavioural and health problems. Simple sound-proofing with hay and giving them plenty to snuggle up in and eat, will help them exhibit normal behaviour.”

Hay up! Burgess Bonfire ‘Home Improvements’ for Bunnies
1. Move house. If you have particularly sensitive breeds, or young animals, consider bringing them indoors, into a garage or a shed at least a week before Bonfire Night so they get used to the different conditions.
2. Try a room without a view. If your rabbit housing faces out into the garden, simply turn it to face a wall or fence during firework displays.
3. Install loft insulation. Add a layer of carpet, tarpaulin or some thick blankets on top of the hutch roof to soundproof it. Ensure your rabbit can peek out, and check regularly to make sure they are not too warm.
4. Add a playroom. Place environment-enriching toys in the hutch such as willow balls, to encourage natural behaviour and exploration and distractions from the noise.
5. Create a ‘Safe Room’. Offer a buffer from the bangs, and provide your rabbits with lots of additional bedding such as hay and straw during firework displays, which will insulate them from the noise. In the wild, small animals such as rabbits would naturally burrow away from loud noises, so ensure they have a place to ‘get away’. Make a cardboard box ‘safe room’ by cutting a rabbit-sized hole in the side of a small box and place it upturned into the hutch, filled with more hay and torn up newspapers.
6. Turn up the heat. Add a microwavable heat pad to the hutch on Bonfire Night, specifically designed for small animals, so they’re even more snug and secure – but ensure they don’t overheat.
7. Get a house sitter. Ensure someone pay regular visits to your outdoor pet during loud displays to reassure them.

• Burgess Pet Care veterinary innovations manager Dr Suzanne Moyes MVB MRCVS is available for interview.
• Burgess Pet Care is one of the UK’s leading pet food manufacturers, catering for the country’s top nine most popular pets including dogs, cats, rabbits, guinea pigs, chinchillas, hamsters, gerbils, rats and ferrets.
• The 200-year-old business is based at Cherry Tree Mill, Snaith Road, Pollington, Nr Goole, East Yorkshire, tel: 01405 862241.
• For generations, Burgess has produced the finest quality foods for people, pets and animals. Starting out as flour millers in the 17th century, the Burgess family moved into producing wholesome animal feeds in the early 1960s.
• Known for its expertise in animal nutrition, the Burgess staff are completely passionate about animals with each of its 85 staff members having an average of two pets each!
• Burgess Pet Care recently marked a new era in the family-run business with one of the biggest investments in the company’s 200-year history following a company-wide rebranding and a seven-figure investment into its Cherry Tree Mill factory.