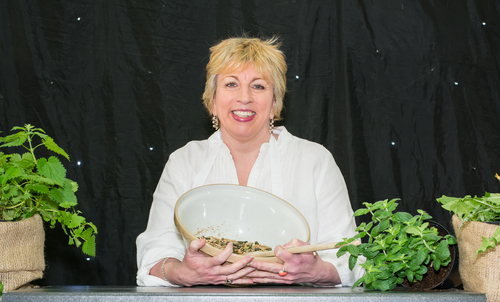 Former Great British Bake Off contestant Sandy Docherty took part in a bonkers bake off for bunnies at the Burgess Premier Small Animal Show this weekend, whipping up wild food for rabbits at the show’s first-ever cookery demo.

Rather than impress the Bake Off judges, the amateur baker showed of her skills to a much fluffier panel of experts as she cooked for the region’s rabbits, alongside Burgess Pet Care’s expert vet nutritionist Suzanne Moyes – displaying all the wit and charm that made her name on the hit BBC 2 show.

Sandy and Suzanne caused quite a stir with their nutritious nibbles for rabbits at the cookery theatre on January 30 and 31 at the Yorkshire Event Centre, Harrogate – cooking up a forage-friendly version of Burgess’s latest specialist product Nature’s Blend – a nugget food for rabbits made from wild hedgerow ingredients, with probiotics and Lucerne extract.

Around 3,000 small animals and their breeders, including cavies, gerbils, hamsters, mice, rats and rabbits, attended the Burgess Premier Small Animal Show – one of the longest running and biggest small animal shows in the UK.

“It was fantastic to be part of such a fun and educational cookery demo,” said pet lover Sandy, owner of a rescue dog called Sloopy. “Not only have I learnt that rabbits have two stomachs, I’ve also helped spread the word that we all need to pay more attention to our pet’s diet and well being.”

Editor’s Notes
• Sandy Docherty took part in the Great British Bake Off 2015 and is a child welfare officer who lives and works near Bradford. Mother of one, Sandy says that she bakes to show her family, friends and colleagues that she cares about them. She says her cookery style “might not be glamorous, but it’s tasty”.
• Burgess Pet Care is one of the UK’s leading pet food manufacturers, catering for the country’s top nine most popular pets including dogs, cats, rabbits, guinea pigs, hamsters, gerbils, rats and ferrets.
• The 200-year-old business is based at Cherry Tree Mill, Snaith Road, Pollington, Nr Goole, East Yorkshire, tel: 01405 862241.
• For generations, Burgess has produced the finest quality foods for people, pets and animals. Starting out as flour millers in the 17th century, the Burgess family moved into producing wholesome animal feeds in the early 1960s, before expanding into pet care that included mobile MRI scanners and payment plans for veterinary practices.
• Burgess was one of the first pet food manufacturers to blend food for rabbits, combining all essential nutrients into one pelleted food instead of the traditional ‘muesli’ feed. It spent 18 months working with local Yorkshire farmers and leading agricultural colleges to come up with its Nature’s Blend food, including conducting numerous ‘taste tests’ with rabbits.