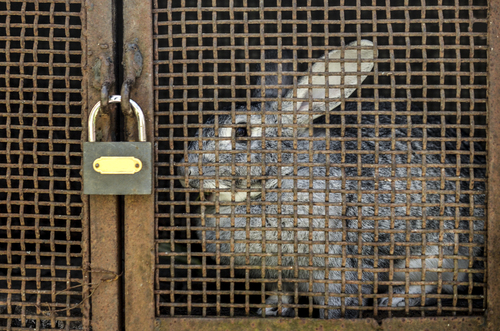 pet rabbits have become “nothing more than garden ghosts” after suffering cruel neglect at the hands of their owners.

“WE CAN’T CALL OURSELVES A NATION OF PET LOVERS,” SAYS ANIMAL WELFARE CHARITY AS IT SLAMS BRITIAN FOR RABBIT NEGLECT

A leading rabbit welfare charity has hit out at our claim to be a nation of pet lovers suggesting there is an “acceptable neglect” of rabbits in the UK.

In the run up to this year’s Rabbit Awareness Week (RAW), Rae Todd from the Rabbit Welfare Association & Fund (RWAF) says thousands of "pet rabbits have become “nothing more than garden ghosts” after suffering cruel neglect at the hands of their owners."

“We think we’re a nation of pet lovers but we’re not,” she says. “It’s about time we dropped that label and aimed at being a nation of good pet owners.”

According to RWAF figures some 67,000 rabbits are dumped in rescue centres, either due to regretted impulse purchases, the cost of vaccination and neutering or behavioural issues, and end up leading lonely lives.

“When we see a solitary rabbit in a hutch in our neighbour’s garden, most of us don’t bat an eye lid. It has become an acceptable neglect,” adds Rae. “Even though it's been scientifically proven that it’s cruel to keep rabbits in this way, they have become nothing more than discarded fluffy toys.”

This year’s Rabbit Awareness Week (RAW), which runs from June 18 to 26, aims to highlight the issue of companionship for rabbits, tasking the 57 per cent of rabbit owners who own single rabbits to find a suitable friend at rescue centres – and to take advantage of free rabbit health checks at their local vet.

Todd believes there’s “no excuse” for not getting the correct rabbit housing and food for rabbits.
“People are not being intentionally cruel to rabbits but they’re not doing the proper research before they buy them. Today, it’s so easy to get information on proper rabbit welfare – it’s all over the internet – and yet more than half of all rabbit owners are still buying tiny hutches without runs and feeding their rabbits a muesli diet with no hay. They keep their rabbits on their own for hours, sometimes days at a time, and when their pet becomes aggressive and unhappy they give them away. It’s a vicious cycle of neglect. We’re urging people to find out more about what’s involved in caring for pet rabbits and if it’s seems like too much responsibility, then don’t take them on – it’s as simple as that. ”

To find out more about RWAF and proper rabbit care go to www.rabbitwelfare.co.uk or www.rabbitawarenessweek.co.uk

• Rabbit Awareness Week runs from June 18-26 with activities and events across the country, including a #BuddiesForBunnies campaign to get solitary rabbits paired up with a companion.
• No other national pet campaign has raised the profile of rabbit welfare as much as RAW. This hugely successful campaign – founded by Burgess Pet Care 10 years ago – teams up with the UK’s leading pet welfare organisations to raise public awareness of rabbit housing, diet and well-being.
• The RWAF was set up in 1996 and aims to improve the lives of domestic rabbits across the UK through education and communication by making people realise that rabbits are intelligent creatures that need space, exercise, companionship and stimulation and are not to be bought on a whim.
• Burgess Pet Care is one of the UK’s leading pet food manufacturers, catering for the country’s top nine most popular pets. For 200 years, it has produced the finest quality foods for people, pets and animals. The business is based at Cherry Tree Mill, Snaith Road, Pollington, Nr Goole, East Yorkshire, tel: 01405 862241, www.burgesspetcare.com