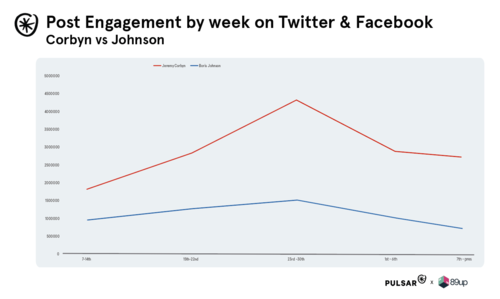 - Since the start of the election, there have been over 700,000 unique mentions of tactical voting

Analysis of social media followers and content engagement across the main social networks and online sources (blogs, forums, online news) between 8 November and 10 December 2019 reveals significantly higher volumes of engagement with content from Jeremy Corbyn in comparison to that from Boris Johnson. For both leaders, the engagement levels of their social media posts has dropped in the last week.

The major issues of the campaign
Brexit remains the topic driving the most online conversation during the General Election, followed closely by the NHS. Yet, for arguably the first time in British history, the discussion about racism is driving almost as much conversation as the economy. Social media conversation about racism, whether anti-Semitism or Islamophobia, had 484,360 mentions compared 508,124 of the economy on Twitter in the period monitored until 10 December. Of the 484,360 mentions of racism, 86,108 are specifically mentions of Islamophobia (18%) and 203,224 mentions of anti-Semitism (42% of total mentions).

Tory tactics to gain social media coverage have been diverting attention away from the major issues of the campaign, but the most shared content has been in the mainstream media, for instance, The Independent’s coverage of the ‘fake Labour manifesto website’ which was shared over 400,000 times online.
The Brexit party has struggled to maintain its strong organic social media strength from the European elections (where it drove 51% of all the shares on Facebook across all the major political parties). Nigel Farage’s Facebook page is driving similar levels of engagement as the pages of Nicola Sturgeon and Jo Swinson.


Notes to Editors
Further results and analysis are available on the Pulsar/89up Social Election Index page. To produce the index, Pulsar monitored follower and content engagement data of candidate and party accounts, as well as mentions of topics (e.g. NHS, Brexit, Economy), across social networks and other web sources (blogs, forums, online news).