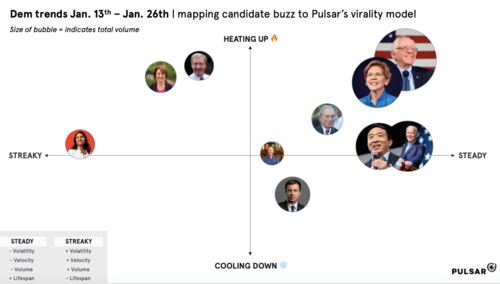 • ‘Virality Model’ tracks digital audiences’ interest in each candidate days ahead of the Iowa Democratic caucuses.
• Sanders shows explosive growth after Joe Rogan endorsement and Warren & Clinton controversies
• Klobuchar sees strong growth, overtaking Buttigieg after New York Times endorsement
Bernie Sanders is surging, and not just in the polls: audience interest in the Vermont Senator has exploded over the past few weeks, amid controversies involving Elizabeth Warren and Hillary Clinton, and an endorsement made by Internet personality Joe Rogan, according to a new index developed by audience intelligence company Pulsar.

As the Iowa caucus approaches on 3 February, Sanders has been driving not only the largest volume of conversations on social media over the past few weeks (13 - 26 January, 2.6m posts mentioned Sanders, more than those of the next two candidates combined – Warren and Biden, both at 1.2m) but the conversation relating to Sanders is also displaying the highest velocity (a measure of how much conversation each candidate is able to drive within a given hour).
“Our index shows Sanders riding a big wave of buzz, which is consistent with movements in the polls and prediction markets,” said Marc Geffen, VP of Research and US Strategy at Pulsar.


“In the last two weeks, the endorsement from Joe Rogan and provocative comments from Hillary Clinton have clearly activated the Sanders audience, driving both high velocity and relatively low volatility compared to the other candidates. These factors signal that the buzz around Sanders can grow at an extremely fast clip and sustain,” said Geffen.

Pulsar’s virality model – traditionally used by Pulsar to measure consumer trends, as well as movie and gaming releases – takes into account five different factors, including: how much buzz has a candidate generated in the most recent period; how much momentum has this candidate recently acquired; how much buzz can this candidate drive in a given hour; whether the conversation about this candidate is stable and consistent, or highly variable; and to what extent is the buzz about this candidate maintaining high volumes over time.
In terms of total volumes, both Warren and Sanders saw a huge growth on the eve of the Jan 14 CNN Debate and the ensuing controversy about Sanders’ alleged remarks.

“We observe an interesting pattern in that, over the full period we’ve been measuring, the buzz around Sanders and Warren seem to move in tandem. More than any other pair of candidates, these two seem tethered to one another in the public’s eye,” said Geffen.

Sanders however, has managed to sustain those volumes further over the second half of January both in terms of virality and interest in search data, thanks also in part to the “endorsement” from Internet personality Joe Rogan, and his strong performance in a few polls that put him ahead of Biden in Iowa.

While Warren has also seen her fair share of attention, racking up endorsements from both the NYT and the Des Moines Register (a leading Iowa daily), that has not translated into a comparable social buzz, with Biden overtaking her in terms of raw volumes over the last week observed.

Audience interest in other candidates has also shifted. Amy Klobuchar, boosted by a New York Times endorsement (along with Warren), has overtaken Buttigieg in terms of virality: interest in her however appears ‘streakier’, dependent on big buzz moments which do not necessarily sustain interest. “Steadier” candidates such as Andrew Yang on the other hand, have been able to drive very consistent virality week over week, remaining in the top five by volume of social buzz.

About Pulsar
Pulsar is the leading AI-powered audience intelligence platform. Combining conversational and behavioural signals from the world’s leading digital destinations, Pulsar helps brands understand their audiences better and create messages that matter to them. It is part of the AIM-listed Access Intelligence Group which develops high quality SaaS software to address the fundamental business needs of the media, PR, marketing and communications industries that is used by more than 3,500 global organisations every day.

Pulsar has three software and one consultancy offering:
TRAC: the most advanced social listening and insights tool on the market, Pulsar TRAC uses AI to help customers analyze public conversation topics from open and premium data sources, seamlessly breaking down those audiences into communities of interest to guide marketing strategy and activation.

TRENDS: the "Google Trends for social media", Pulsar TRENDS allows customers to track the momentum of conversation topics on social media in real time at both the global and local level, with historical data going back 14 years.

CORE: the one-stop-shop monitoring tool for owned-channel analytics, Pulsar CORE allows customers to monitor the growth of their audience, benchmark against competitors, and track the performance of content across channels, from social media to Google Analytics.

Research: blending some of the brightest minds in audience intelligence with custom analytics models by industry, Pulsar works with leading brands in continuous and one-off research engagements, integrating quantitative and qualitative methodologies to turn audience data into strategic insight.