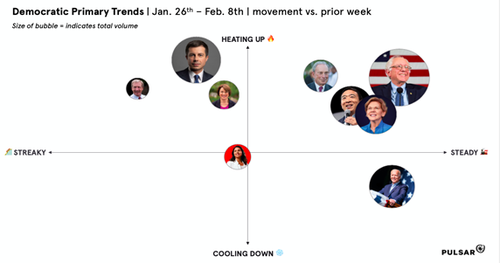 Los Angeles (CA) – Interest in Pete Buttigieg has rapidly increased after his very strong performance in the Iowa caucuses according to the Pulsar Primary Index which analyses social media and online conversations around each candidate. In terms of digital profile, Buttigieg is now inching closer to Bernie Sanders who continues to drive the largest online conversation volume of all candidates in the Democratic Primary.

‘The big swing in momentum for Buttigieg suggests that the Iowa caucuses remain a pivotal moment in the primary process and can shift audience perception in a big way. In the last week, Bloomberg has also experienced a huge bump in conversation following the caucuses, benefitting from mainstream media analysis about his prospects given the debacle in Iowa.’

Based on analysis by Pulsar of more than 5million US based social media and online conversations referencing the Democratic Primary candidates over the past week (Feb 2-8th), Sanders continued to drive the largest volume of conversation - more than 1.37million mentions, to Buttigieg’s 0.95million. But, interest in Buttigieg has been growing faster, with a week-on-week growth rate of 440%. Conversation about Buttigieg also showed the fastest velocity, a measure of how much conversation the candidate is able to drive within a given hour.

Pulsar’s analysis considered more than 5 million posts made in the US mentioning the Democratic Primary Candidates published between 2nd - 8th February 2020 and, to give the most accurate evaluation of audience interest and engagement, takes into account five different factors. These include: how much social media and online interest has the candidate generated; how much momentum is there on social media about the candidate; how much interest on social media can this candidate drive in a given hour; whether the conversation about this candidate is stable and consistent, or highly variable; and to what extent is the engagement and conversation about this candidate maintaining high volumes over time.

The Pulsar Primary Index also shows that audience interest has grown around Mike Bloomberg after the Iowa Democratic Party’s inability to accurately report results of the caucuses and the consequent chaos and uncertainty about who had actually won. Bloomberg benefited from mainstream media’s analysis about his prospects following the Iowa fiasco seeing a huge week-on-week growth (+290%) in mentions, the second largest after Buttigieg’s.

About Pulsar: Pulsar is an audience intelligence platform, combining conversational and behavioral signals from the world’s leading digital destinations with industry-specific AI to provide transformative insights for marketing and innovation strategy.