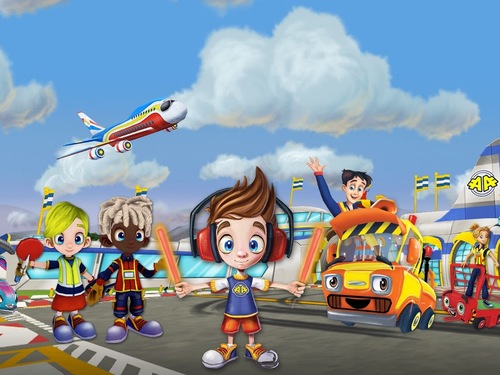 We focused solely on the mobile and tablet which has allowed us to get it right, right from the start.

Airside Andy has launched its eagerly anticipated MMO as open Beta, the first kids MMO in the world that has been designed exclusively for mobile and tablet.

The highly interactive game was designed in partnership with Technicolor and Flying Squirrel Games (ex Club Penguin and Dragonvale).

Peter Le Masurier, Co-Founder, Airside Andy said: “This is a world first, if you look at other MMOs in this space, such as Club Penguin and Moshi Monsters, they were designed and built originally for PCs then developed into apps. As a result, certain aspects of game play are not wholly suited to the app environment. We focused solely on the mobile and tablet which has allowed us to get it right, right from the start.

“Simple functionality, such as interconnecting play areas means users can walk around as if they are truly within the busy space of a working airport. Together with stunning graphics we are offering kids an open-ended game-play within the fascinating airport environment.”

Kalvin Morrow, Founder of Flying Squirrel Games said: “Children love airplanes, vehicles and travel; Airside Andy has it all. It’s colourful and creative, and a place where children can work together to keep a real-life location operating and continuously developing.”

More games, interactivity, user customisation and learning-based content will be launched within the game in the coming months.

The MMO and Airside Andy brand will be complemented by a CGI animation series created in partnership with Zodiak Media.

Jean-Philippe Randisi, CEO, Zodiak Kids, said: “We are delighted to be partnering with Airside Andy. With over three billion air passengers visiting airports every year, airports are to our times what train stations were to the 20th century. There’s no greater time for kids worldwide to have fun watching and exploring them.”

Designed for children aged 4 – 8. Airside Andy is free to play, with in-app purchases and memberships available to enhance the in-game experience. To join the fun visit www.airsideandy.com

Kids can explore the busy world of the airport through fun characters and an environment filled with joyous, creative and open-ended play.

The unique learning emphasis on this brand new kids property is firmly rooted in developing younger children’s knowledge and understanding of the world, especially early concepts connected with Social and Emotional learning (SEL) such as community, cause and effect, collaboration and expressing emotion, as well as those associated with the STEM curriculum – Science, Technology, Engineering and Mathematics.

Flying Squirrel Games is an independent game developer focused on mobile free to play games for kids and the mass-market audience. Established in 2015, their studio is primarily located in Malta, with operations in Canada.

"the wonderment of the airport...a secret mechanical world of discovery"